Thursday, good; Friday, not so good

OK. I can finally sit upright. I had planned to write a nice long post on my St. Patrick's Day, but to be honest, most of the day looks about like the picture below. But I'll do my best. 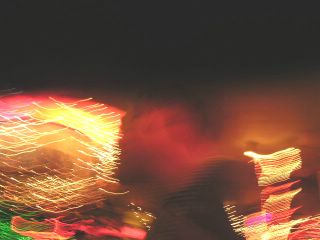 Thanks to my boneheaded brother (more on him below), I arrived at the parade a bit late, so I missed the police band and the police bagpipers. But I don't think I missed much because the parade went on for a good hour after I got there.
The parade primarily consisted of people with Irish names marching down Fourth Street; if your family is Irish and you live in St. Paul, you're in the parade. Each family carried a banner and marched along spelling out their name or singing songs that they had worked their name into. Most of the families were already thoroughly intoxicated, like the O'Keefe clan (pictured below). They were carrying their sign upside down but were rowdy and loud enough that you wished you were a part of them: 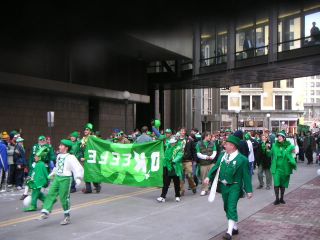 Some of the families were a little wilder than others, these people decided it would be a good idea to throw a family member in the air: 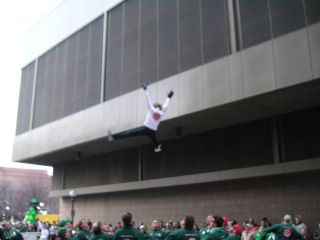 Most of the families were pretty laid back, though, using the parade as an opportunity to dress themselves and their children in silly outfits: 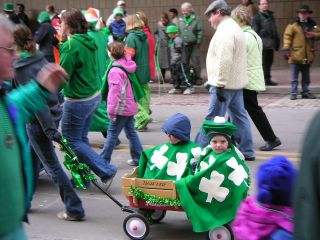 It wasn't all just families. There were also bagpipers: 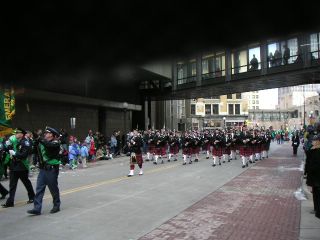 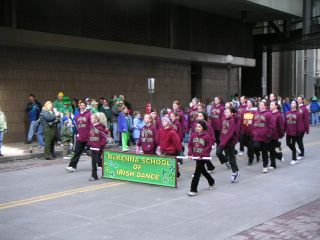 And what's a parade without rollergirls? 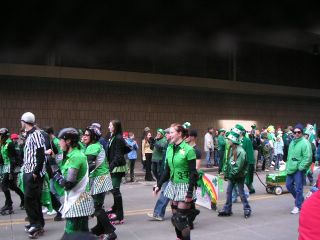 I spent a lot of time last week encouraging people to come out to The Liffey, and it looks like my efforts paid off. It was shoulder to shoulder in the pub. Clearly I just was not thinking clearly when I thought I'd be able to find a place to sit in an Irish pub in an Irish town on St. Patrick's Day -- especially when The Liffey was the closest pub to the end of the parade route.
I couldn't physically get to the bar and had to have a man who had made it order my pints for me. Considering the crowd, I ordered two straightaway. When he was passing back my second pint, a little hand shot out from nowhere and took the pint away. I had my fingers on it but didn't want to yank it away because I didn't want to spill any precious, precious Guinness.
"Hey, whoa! Whoa! That's mine," I was saying.
Then I looked and saw that my pint had been stolen by a little old lady. Bare minimum she was 87 years old and I watched in shock as she completely ignored me and took a massive swig of the Guinness. Then she shuffled away through the crowd as I burst into laughter. What was I supposed to do?
Then, behind me, her daughter was fighting to catch up with her.
"Oh my God, did she take your beer?" she asked, digging into her purse.
"Yeah. But that's alright. I just bought your mom a pint. She's having fun."
"Too much fun," then turning to fight the crowd some more, "Mom! Mom!" 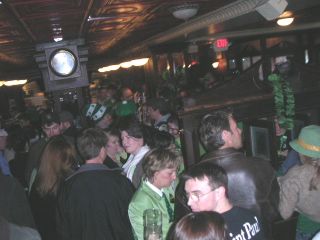 It was so crowded that if anyone reading this blog had come to The Liffey, we likely never would have met up. I had enough trouble finding my brother, Jon, and his new pal, Vanessa. The two of them are presently living a drinking story that beats everything in my book. 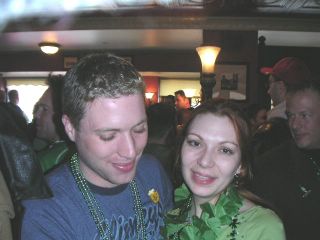 The story starts on Monday when Jon and his friends, TJ and Tony, decided they would drive to Aberdeen, South Dakota, to visit a friend of Tony's. In typical Tony fashion, he didn't bother to call his friend before coming out and learned upon arrival that the friend had skipped town rather quickly and mysteriously a few weeks before.
Then the trio's car broke down.
They got a cheap motel room and walked to the nearest bar, a dingy place with no windows; the only sign of its being an alcoholic establishment being a worn banner on an outside wall that said "Drink Specials."
"Drink specials? That's good enough for me," Tony said.
The bartender was 26-year-old Vanessa of the mysterious past. Vanessa claims to be related to this author and originally told me her last name was DeVine, a fact negated by her driver's license. But she was definitely South Dakotan. The strange thing about all South Dakotans is that 9 out of 10 of them are only about a degree removed from the other people you know from South Dakota. She knew the cousin of a girl I used to date, despite the fact that the girl was from a town 50 miles away.
Upon hearing Jon, TJ and Tony's story of being stuck in Aberdeen, Vanessa decided she would drive them back to the Twin Cities the next day. In between that time, there was a great deal of drinking at the trailer home of a very large and crazy Native American, some wild and directionless firing of a .45 caliber handgun, and a near-death experience when Tony thought it would be funny to yank the emergency brake of Vanessa's car and sent it into a ditch.

Despite Jon's observation that "every beer is a sandwich," we decided to leave The Liffey after my third pint to search for food. We landed at the Muddy Pig, home to some of the best bar food in the Twin Cities. I didn't take any pictures there nor at The Bulldog in Minneapolis, where we went afterward along with my friend, Heidi. The picture below was taken at the Turf Club, back in St. Paul, after I decided that turning off the flash made the pictures look cool. It certainly makes them look more like what I was seeing at that point: 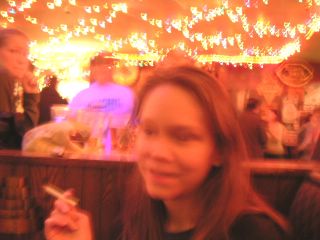 We went to the Turf Club to see Belfast Cowboys, a Van Morrison cover band that my best friend, Eric, happened to be gigging with. I should point out that his shirt is not, in fact, pink. We were sitting beneath some sort of black light: 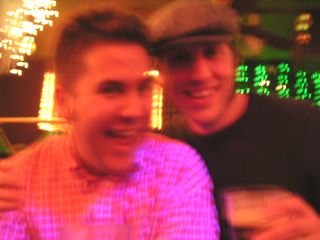 Not surprisingly, I suppose, Vanessa has a few friends in the Twin Cities. One of them, Jen, came out with us, along with her boyfriend, Joe. Joe took the picture below. From left to right you see Jen, Vanessa, Jon, Heidi, drunken me, and Eric: 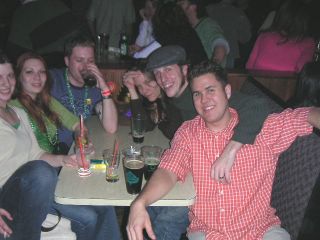 All said, I had a great time Thursday. Unfortunately, I paid for it viciously the next day. I was not able to drink water until 2 p.m. and even now I feel poorly. I'm thinking of using this picture as my new profile photo, what say ye? 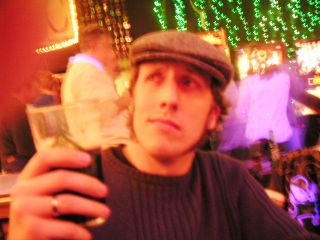