Oof. I'm sure it's physically possible for me to have consumed more grilled meat over the holiday weekend, but it would have been a challenge.
That said, though, most of my weekend was Welsh-focused. I had an interview for Radio Cymru Monday morning and had spent the weekend attempting to cram in preparation.
I think the interview went OK. The Beti George is a consummate pro and she was able to lob softball questions at me with ease. I only bunted on one of the questions, to continue the metaphor. I had made a joke before the interview was being recorded and she was trying to lead me into saying it again. Unfortunately, I am dumber the wet piece of wood, so I stumbled through my response. I almost take pride in my ability to screw up her trying so hard to make me look good.
It looks as if the interview will be broadcast on July 13. I doubt any English speakers will be interested, but I'll be sure to draw attention to it once I know the exact time the interview will be broadcast (BBC schedules only come out a few days before). 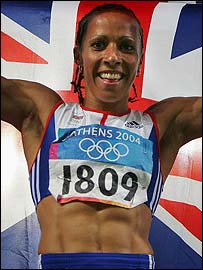 The IOC is set to announce who will the 2012 Olympics Wednesday morning. It's sort of almost exciting. I mean, we all know Paris will win, because I can't stand those Frenchies*, and the universe thinks it's funny when I'm angry. But still, one can hope.

If you look at the top picture of this story, the guy who is about to shoot Chief Constable Michael Todd with a Taser gun is taking far too much pleasure in his job.

There appears to be some disagreement on my choice for a profile picture. As such, I may be willing to let you persuade me to use a different picture. Your choices are:
- Sit-On-Roof Chris (current picture)
- Drinking-Guinness Chris
- Bored Chris
- Jovial Chris
- Stuffed-Mouth Chris
- Dissolute James the Frightful Cain-Raising Highwayman
Because this is a blogacracy, I reserve the right to ignore your opinion.

*I think it's important to note that I have always disliked the French -- it has nothing to do with the whole brouhaha leading up to the Iraq Debacle. Indeed, one of the things that angers me so much about the Bush administration is that their stupidity led to the French being right about something.
Posted by Chris Cope at 23:45

I, too, am going to have to go with the highwayman.

My vote is still for Bored Chris.

Drinking Guinness Chris, please. It lends you an air of aloof listlessness and inattainable coolness. Or something.

I don't think any of the pictures do you an injustice.

What was wrong with the last pic?!

If you must change it though, my vote is for the 'Sit on roof' Chris too. Unlike Lucy I'm going to use a primary school reason and say that it's just better than the others!