In your face, you French bastards! 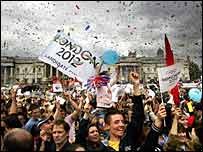 Huzzah! In seven years they'll be playing beach volleyball at the Horse Guards Parade -- London won its bid to host the 2012 Olympics.

It's a bit sad that the marathon will finish inside the as-yet-built Olympic Stadium. I think it would have been appropriate (although, perhaps not visually exciting) to have it end in White City. The marathon gets its current 26.2-mile standard length from the 1908 Olympics when it was extended so as to end in front of the royal family's box at White City stadium*. There's a BBC building there now, which I think would also be appropriate -- the BBC is the new British Empire.

Nonetheless, I am looking forward to it. I think the choices of venue are particularly inventive. One of my favorite elements: "The Serpentine boating lake (in Hyde Park) will undergo a major clean-up so it can be used for the swimming part of the (triathlon)."

Of course, all this London Olympics stuff has an emotional connection for me because I have loosely tied my personal ambition to the city's Olympic bid. When I first read about London's bid a few years ago, I thought: "Man, wouldn't it be cool to be there for that?

"Obviously, though, it would be impossible to find a hotel amid all that, and London is expensive enough already without adding inflated Olympics prices. No, one would have to be living in Britain already. Hey, there's a good idea. I hereby pledge that if the Olympics are in London in 2012, I will be living in Britain."

I modified that pledge when it looked like Paris was going to win the bid (you'll notice that it was a shock to CNN and MSNBC, who stationed reporters in Paris). I made a simple promise to myself to be living in Britain by 2012. But my emotional attachment remained and London's success makes me now feel that I will be successful, too (that's very sappy, I know). 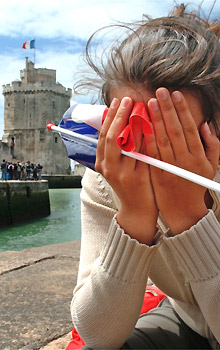 I am delighted by the fact that London won out over Paris specifically. The final IOC voting had the two cities head to head, and the immediate speculation in French papers (according to BBC reporters) is that Chirac's comments earlier this week about British food are what put the nail in Paris' coffin. I would like to think the IOC realized that while Paris had put forward the best bid, it is unfortunately populated by French people and therefore totally ill-suited to host an international event.

I am stupidly excited.

One thing I don't quite understand, though -- why was David Beckham involved? Apparently he is just The UK Man of Sport.

*This seems to be the consensus story from several websites, but the official website of the royal family says that it was the starting line that was extended, not the finish line.
Posted by Chris Cope at 18:53

I'm not so enthusiastic as you - The government can't afford it to start with. We'll all have our taxes increased to pay for the thing. Londoners will be hit badlly with a larger congestion charge. Plus I'm sure the residents of London (plenty of whom aren't even British) are really looking forwards to the streets being jam-packed full of tourists for a month!

Plus, it's all supposed to be for UK sport but mainly only the South East and London will benefit.

Very negative, but that's what I think! I wish Paris had got it!

Although frankly I'm considering moving out of London before then. Our rent is £900 a month and rising ...

Still, I may go down there and practice some beach volleyball just for a laugh.

English food still sucks, though. They have to import all their good food.

I don't mean to be rude, Greg, but have you been to Britain in the last decade or so?

No, you got me. Just a weak joke. I read a few years ago about the English Renaissance in cooking, and since then, apparently, it ain't kosher to make jokes about English food. But I still can, can't I?