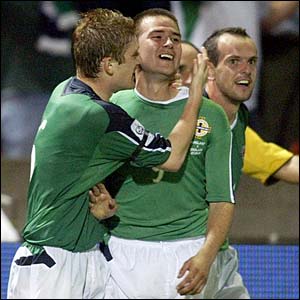 Holy shit. Northern Ireland beat England Wednesday for the first time in 33 years. If you know anyone from Northern Ireland they are going to be in very rough shape for the next several days.
Meanwhile, Wayne Rooney is a thug. I used to think he was funny, but more and more I've come to the conclusion that he's an ass. And it was somewhat sad to see England, ranked so high, fall apart.
Listening to Northern Ireland's helped to take the sting out of Wales' dropping itself to the bottom of its World Cup table. Wales has not qualified for the World Cup since 1958.

I thought this was interesting -- the BBC has put together several pages detailing British immigration.
More than 155,000 people born in the United States are currently living in the United Kingdom (actually, they were living there in 2001 -- I sense that number has probably jumped under the current president) -- most are in London. That puts us sixth highest in the number of immigrants to the UK, but we come in first on the list of high income earners.
Posted by Chris Cope at 23:52

It is always nice to see Northern Ireland beat England at something.

I wonder: If Wales qualifies for the Cup, will you be moving there?

You're probably not packing, yet.

England now need to win their next two games to be assured a place in the world cup.

I so hope that they don't qualify at all. It will be more than worth coming last for that.

It was good to see the current England team exposed as the lazy uninspired lot they are: maybe it'll do the nation's team good in the long run.

I saw that immigration list too, and was really surprised to see Germans were so numerous in Blighty. Maybe they are just more adept at keeping a lower profile than, say, the Yanks.

Being the analytic, I was fascinated by those immigration numbers. I spent an entire cup of coffee and 30 minutes of Half Nekkid Thursday reading them. I wonder if those are usable statistics.