I am alive and exhausted and back home in St. Paul. I rather wisely took the day off today to work through some of the jet lag, which gives me loads of time to fuck about on the computer. I put up a new template for my Welsh blog because I've decided that it needs more love. Looking just like this blog made it feel sort of half-assed. I have no idea why my picture gets cut in half on the Welsh version of me, but I actually like it.

I want to put up a new template for this blog, too, but I wasn't able to find one that I really liked, so I decided instead to spend ridiculous amounts of time uploading all the photos of my trip.

For ease of reading, I am breaking things down into the three segments of my trip.

One thing I should warn you about right away is that I am in some of these pictures. You may not want to go any further if you've just had lunch. 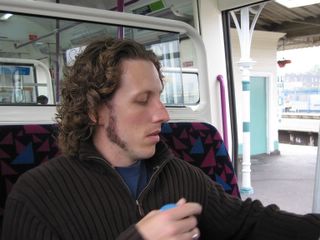 Look at me! I'm on the London Tube! I'm hip and cosmopolitan!

Chris and Jenny had sent me the keys to their flat so I could rummage through their underwear drawer while they weren't there get some much needed sleep as soon as I got to London. When I got to their flat, I found that Jenny had left a PowerPoint presentation and the both of them had showered me with gifts. Jenny later told me that this behavior is a part of her and Chris' Scottish upbringing -- Scots would rather starve children than deprive company of luxury. 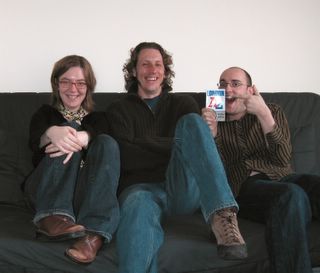 Here I am with Chris and Jenny on their couch. To save confusion when we all get old and suffer dementia, Chris has brilliantly figured a way to ensure that we will always know where the picture was taken.

The Phins fed me, and, in Jenny's case, showed me the sights of London even as Death's icy grip drew near. They also gave me Internet access, so much of my time there was blogged here and here.

Meanwhile, in Dublin, Lucy (hey, she's got a new look) spotted a street named after one of the most beloved Americans of all time -- me. She snapped a picture of said street with her camera phone and sent it to me with a promise to organize a parade there in my honor. 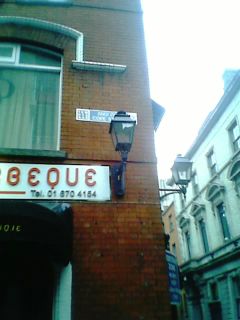 When I mentioned the existence of Dublin's Cope Street on my blog, Huw ran to his London A-Z and found two spots in London that share my surname. This rather obviously set the agenda for the next day -- find that street. 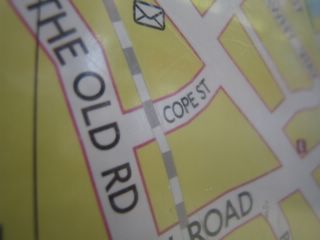 Tube station map showing the presence of the most kick-ass street in London. 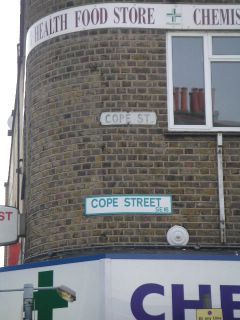 After a hearty breakfast on Saturday, we made our way to the fabled urban Valhalla that is Millwall and found my street. There is a chemist's on my street, which means that I shall for some people ever be associated with cold remedies, condoms, and hemorrhoid relief. The family name is in good stead.

We were all deeply moved by the experience and decided that it was best to part ways -- I to western England, Jenny and her boy to the cinema. 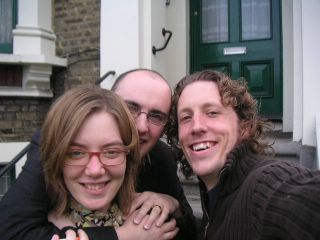 Jenny, Chris and me. Chris is hiding.
Posted by Chris Cope at 19:36

All I can say is your friends are genuine keepers.

That picture of the young lady and I next to you on the sofa makes us look like we have shrunk in the wash. You damned Americans are just built to a different scale to us cold-weather Scots.

Incidentally, I think it should be clarified that the ancient Scottish tradition of hospitality inexplicably doesn't explicitly mention PowerPoint presentations. The young lady thought of that all herself.

A pleasure to have you, sir. You and your better half are welcome at any time.