I am going to break the narrative here and go back to part I for a second to tell you that I really dislike this picture. This has nothing to do with Jenny or Chris, who are a very cute couple here, and everything to do with me. Specifically, it has to do with my teeth.

I hate my teeth. Honestly, I could go on Oprah and weep and shake and use up a whole box of Kleenex in expressing my overwhelming hatred for my teeth. I want so badly to get them fixed, but I just don't have the money. While most men dream about cars, I dream about Invisalign.

And to this point, I have been very conscious about managing to only put pictures of myself on this blog that do not show my teeth. Sometimes this requires extreme vanity on my part, and I will take pictures over and over so as to avoid showing my teeth. Do you realize how tricky it is to grit your teeth like a pirate without really showing your teeth?

But when I take pictures with friends, I can't sit there and make them do it again and again and again until my twisted vanity is satiated, can I? So, my teeth are there for all to see. You think Cody is going to want to look at this blog now? I am neither interesting nor handsome.

I bring this all up as way of explanation for the goofy look on my face in the picture below. I was trying not to show my teeth. 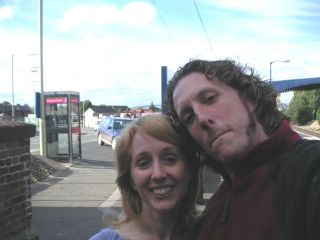 I went to Ludlow, England to attend the concert of my longtime friend, Shiona Cormack. She and I have known each other since we both studied at Portsmouth. That means we have been friends for almost 10 years. Both she and I were somewhat taken aback by this realization because neither of us is yet particularly keen on acting like an adult.

Strangely, in the time that I have known Shiona, I had never heard her sing until last Saturday. She sings soprano and the word that I keep using to describe her performance is "transfixing." It is amazing that wee, fluttery Shiona can fill a church (the concert helped raise money for St. Laurence's Church) with such full and rich sound. I wrote in my journal that night: "Any person who could hear her sing and not fall madly in love is suffering from mental disease."

I tend to think very highly of my friends.

The concert was put on by the Morriston male choir, a group of fellas from Wales who are a hit with the old lady crowd.

And on and on and on they went. My favorite conversation came after a short period of silence, when, completely without set-up, Welsh Old Lady 1 said:

My digital camera allegedly will record audio and I wanted very much to attempt to record their conversation, but I was afraid that doing so would be too obvious.

Shiona's mother had agreed to put me up for the night, so after the concert we headed out to the countryside home that she shares with a woman named Janet and approximately 72 million Labradors, and had tea. Then we had some more tea. In high contrast to the Welsh old ladies, Shiona's family is not one of talkers. We filled the silences by drinking tea.

In the morning, Shiona and I took two of the dogs out and went for a walk through the countryside. At some point I thought to myself: "This will be my life one day."

Except, instead of walking through the English countryside with Shiona, I will do so with my wife. And we will be in Wales. And there probably won't be any dogs because Rachel doesn't like them. So it wasn't really my life at all.

After we got back, Janet made us lasagna that was loaded with vegetables, we drank about 500 cups of tea, and then it was time to drop me off at the train station. 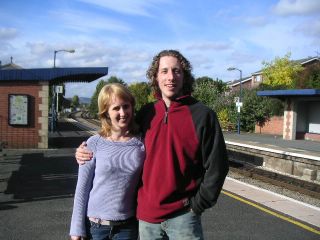 Shiona and me amidst the beauty of the Ludlow train station.
Posted by Chris Cope at 20:47