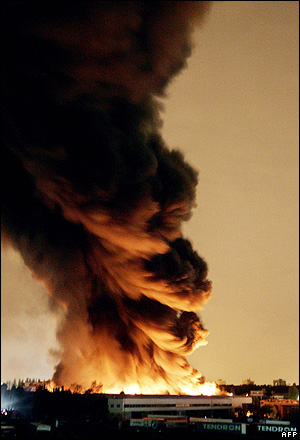 Here in the northern parts of the United States, we have the concept of a winter car -- a piece-of-shit car that we use amid the salt and ice and dirt of winter. The car costs very little, looks like crap, and usually has mechanical problems, but we put up with it for the peace of mind that comes from knowing we won't be upset if we wrap it around a tree in a blizzard.

Apparently, in the northern suburbs of Paris, they have riot cars -- similar to the winter car, but always ready for burning amid a major civil unrest. I wonder if they advertise these cars in the paper in similar fashion:
"82 Citroen. Runs good. Some rust. Great riot car. €250"
Posted by Chris Cope at 16:31

Would the rioters respect the same code of etiquette?

"Oh, look, these people have two cars parked outside their maison: a '04 BMV and a '74 Renault with the back left window missing and three tires. Clearly, we are meant to burn the Renault. Commencer !!!!"

Or do you have to hide your "non-riot" auto and hope for the best?

We're meant to have a nice car as well? Nobody told me!