Not one of my best 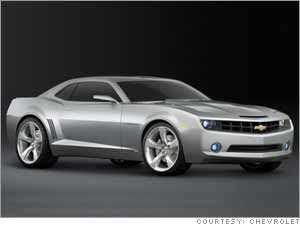 Chevrolet has introduced its new Camaro (mispronounced today by a BBC reporter as the "kä-mä-rO"), which I like the look of and secretly want, despite the fact that its 6-liter engine would suck up petrol like a small country and it will almost certainly be a flashy piece of shit.
Although, allegedly American cars are not as shitty as we believe them to be -- they're just not as good as we expect them to be.
It's probably a sign of American automakers' demise that many of the cars introduced over the last few years and at this week's auto show -- including the Chrysler Imperial and the Dodge Challenger-- are designed to remind us of a time when American cars were not worthless pieces of crap.

Kobe Bryant did not actually score those 81 points in a single game. It was Chuck Norris in a Kobe Bryant costume.

Ooh, classy. I wonder if he does those in velvet.

You fool! You fell victim to one of the classic blunders. The most famous is never get involved in a land war in Asia, but only slightly less well-known is this: never sign a legally-binding contract with Vince McMahon.

Random rude thing I wanted to say to a girl wandering the halls of my benevolent employer: "Honey, with your long red hair and Pippi Longstocking braids, you're pretty much ticking every box on my fetish list. Do you have a Catholic school girl outfit?"

Random EastEnders dialogue:
GARRY: Why can't we all just be happy with what we've got?
MINTY: Maybe because most of the time what we've got is rubbish.
Posted by Chris Cope at 00:58

i have too many things to say and nowhere to begin.

maybe you should carry a school girl outfit with you at all times, in case you run into her..then you can just spring it on her and you won't even need to ask her

Just what we need: Another gas hog.

That's a good east enders. Translate that into Welsh so you can amaze those people with your common sense.

#1 that was FANTASTICALLY GREAT art. velvet WOULD make them more spectacular! i agree. you weren't being sarcastic were you?

#2 another classic blunder is giving the person you're blackmailing your key evidence against them so they can tell on themselves before you can.

#3 in reference to your rude coment... rachel doesn't read your blog does she?? hmmm?? i think you would be in troub-ble!

I never would have thought they would broadcast Eastenders in the US as well. Are you watching it to find good conversation-material with your new neighbors?

i bet you were thrilled when the laura prepon character on "that 70s show" got sent to a catholic school (our lady of perpetual sorrows). many episodes began featuring donna, the tall shapely redhead, in school girl outfits, kneehighs and all.

not that i watch much crappy TV. ok, i do, i just prefer cheesy sitcoms to reality shows.

oh, and chris, speaking of crappy american cars that wish they were kickass, you should blog about how you wanted a mustang forever and ever and you finally got a mustang convertible and why you don't have a mustang anymore. because your struggle with that car was pretty hilarious.

To this day, even though we're separated and divorcing, my (soon-to-be) ex wife emails me complaining every time I mention other women, fetishes or catholic school outfits on my blog. You're a lucky so-and-so that the child bride is so understanding.

Or perhaps she has similar fantasies?

Me Over Here said...