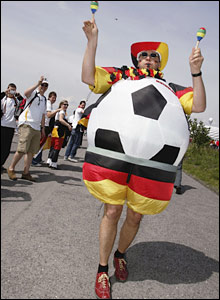 If you needed another reason to watch World Cup, Julie Foudy is part of ESPN's coverage team. Mmmmm, Julie. Julie Foudy is good for America.
I'm actually somewhat impressed with the coverage that ESPN/ABC is giving the World Cup. In 2002, the only matches on ABC were U.S. matches, and they were time-delayed to air on the weekends. Some games aired a good three days after the fact. And some other matches simply weren't available. I remember having to watch England v. Brazil on Spanish-language television.
They have their shit together a little better this time around -- all the matches are being carried live on either ESPN2 or ABC. And they've invested a little bit of time and money putting together fancy promos voiced by Bono. Of course, the drawback is now that I can actually watch the matches, I am watching the matches. Pretty much nothing was accomplished today.

I've managed to become totally slothful in just one week. Things started out so well -- I was exercising and keeping track of all the things I needed to do. Then Thursday I went over to my friend Eric's house and spent the day drinking beer and playing with his dog. Today I spent several hours watching soccer. Go me.

I had planned on redesigning this blog, but when I finally found a template that I was pretty sure I liked, the child bride pointed out (rightly) that it was actually not all that good. So, I switched my picture and doctored the sidebar. Things will probably stay that way for another two years.
Posted by Chris Cope at 00:30

Sorry I have been so slothful in getting this post up, Chris.

And with 3 matches on at weekends? Ye gads, how am I supposed to fit in anything else?!