The child bride and I have a TV now. A friend of Rachel's from church managed to find one we could have for free and insisted on delivering it to our doorstep. It is an enormous 29-inch Panasonic television that receives BBC1, BBC2, ITV and S4C.
I'm really not sure how I feel about this. I was quite happy being one of those people who didn't own a television. There is something about a television that makes one feel as if your time is being stolen away from you. I am perfectly happy to lose several hours of my life to writing or reading a book, but I find myself almost angry at the 90 minutes lost to "The Story of Light Entertainment."
On the positive side, I am now able to watch some Welsh-language programming -- what little of it there is. And EastEnders. When did Phil become so affable?
For those of you wondering, yes, I bought a TV license straight away. I'm still not sure I'm happy that I own a TV, but at least I can take comfort in knowing that I am paying my share of all the internet features I use. 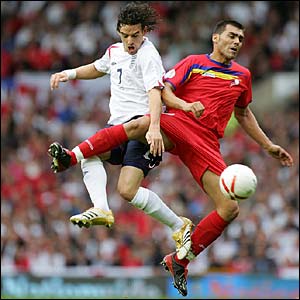 With my new television, I was able to watch a bit of the England game on Saturday night. Commence Welshy-style grumbling that I was not able to watch the Wales game. Not that either was really worth watching -- England proved they can beat up on a load of amateurs and Wales proved they aren't all that great. Both of these things you could have guessed before the matches started.
It helps to ease the homesickness that the Wales side are just not quite good enough -- they remind me of the Vikings somewhat.

Curly reported he had the following conversation in a pub in the wee hours of Sunday morning:
Curly: Alright mate? Good night so far then?
Random Bloke: Yeah. Good. Just enjoying a night out before work again on Monday.
Curly: Yeah, good idea - where do you work?
RB: Cardiff Uni as a lecturer.
Curly: What subject do you lecture in? (grasp of vocab had left me)
RB: English.
Curly: You from Wales?
RB: Yeah, can't speak Welsh. Learning though.
Curly: Lessons? Or just teaching yourself?
RB: BBC website.
Curly: Oh, you know of Chris Cope then? The American who learnt Welsh over the internet?
RB: (nods very positively) Oh yeah... that guy is just legendary. What a thing to do. What a legend.
Curly: Indeed, well - off to get a taxi. See you again.
RB: Yeah. Bye.
Posted by Chris Cope at 22:13

Television is the great time thief.

Oddly enough I had that exact same exchange at the Groveland Tap last night.

And a late thanks for the point last week. Even with Anthony's match and a plus the other day, I still feel I'm up on him.