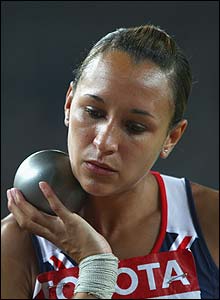 Those of you playing along at home may not know this, but the World Athletics Championships are currently taking place in Osaka, Japan. This is the major competition that Olympic athletes compete in when there are no Olympics.

In the United States, this is never televised. But here, where they televise sheep dog trials and air racing and darts, athletics is receiving pretty extensive coverage. It's refreshing. Arguably, people of the United States are a bit silly in that they suddenly care about the Olympics and forget all about these sports in the space between.

Also refreshing is the British attitude toward the sports. If you watch Olympics coverage in the United States, the general attitude is that there's not much point in watching unless an American is going to win (or, it's figure skating/gymnastics). It's similar to Eric's response to may taking part in various organized runs: "Did you win? No? Then what's the point?"

If such an attitude were held in Britain, of course, Olympics and World Athletics coverage would consist of "Allo, Allo" repeats. No -- here, they tend to go on about personal bests and how an athlete has improved over their past performances. All of which sounds like a load of rubbish until you see Jessica Ennis absolutely delighted with a fourth-place finish. And then you think: "Hey, good for her! She's a normal person."

I can't imagine there are too many people in their right mind* who attend the Twin Cities marathon thinking: "I'm going to win this thing." Most people are happy to simply take part or improve upon their own performances. For example, when I run in the Cardiff Half Marathon in a month, I'll be happy to equal or better my performance in the Fargo Half Marathon. Actually, I may not even do that well. I won't care, though, because I'll be more focused on the fact that Elisa, Donal and Isobel will be in town and I get to go to the pub with them afterward. 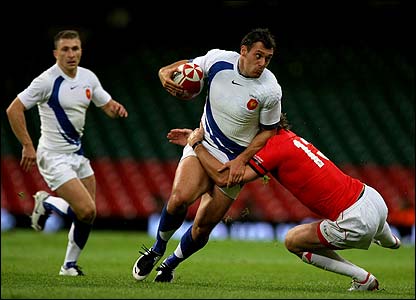 Anyway, there's something to be said for this mindset of personal bests. Britain's goal for the entire World Athletic Championships is to walk away with three medals -- colour is irrelevant.

Sometimes you need to judge athletic performance on something more than whether you win or lose. I found myself thinking about this today whilst watching France comfortably destroy Wales in rugby.

Those of you playing along at home will probably be equally unaware that the Rugby World Cup is less than two weeks away. In this rugby-intense country, though, they've been thinking about it since... well, since the last World Cup.

It may surprise you to learn that the United States has a rugby team, and that it has qualified for every World Cup, including this one. As a matter of fact, the United States has held the Olympic gold medal in rugby since 1924 (although, that has more to do with the fact that rugby hasn't been in the Olympics since 1924**). But they're unlikely to make much of an impression this time around.

All the teams with a realistic shot at the cup have rosters of entirely professional players. That's not so much the case for the Yanks. In terms of players in top-level teams, the United States has really only got Mike MacDonald, who plays for Leeds Carnegie, and Paul Emerick who plays for Newport Gwent -- my nickname for him is "Viking."

To make things worse, the United States is the lowest-ranked in its pool of South Africa, England (to whom the United States suffered the biggest defeat in its history -- 106-8), Samoa and Tonga. In short, we're going to get killed.

I've decided that Wales needs to approach the World Cup with the same mindset. The fact that they have only beat one proper team in the last year is indicative of a team that's not going very far in World Cup. I have already accepted this, I am emotionally prepared for the possibility of Wales losing to Japan; their failure won't affect my enjoyment of the World Cup. But I am trying to think what could realistically be considered a successful World Cup for this team.

Wales is a team that won Six Nations with a grand slam a few years back. With most of the players that accomplished that feat still on the roster, this should be a team with a real chance. For whatever reason, that's wholly unrealistic. So, what good can they get from this World Cup? What challenges can they set that are both legitimate yet achievable challenges?

*There are a surprising number of people participating in marathons, though, who are not in their right mind.

**The story of the 1924 Olympics is one of my favourites. The United States played France in the final. At the time, the rules of rugby weren't exactly set in stone and a game's time would fluctuate depending on the mood of the teams. The Americans asked for a 90-minute match because they suspected they were more fit, and the French agreed because they were the 20-to-1 favourites to win and they wanted to put on a good show for the Paris crowd. The Americans then proceeded to beat the living hell out of the French, scoring five tries, and breaking the arm of a French winger. The French crowd were in an uproar by the end of it and somehow one of the French reserves was knocked unconscious by a walking stick amid the ruckus. When the U.S. national anthem was played, it was booed vociferously by the 30,000-strong French crowd.
Posted by Chris Cope at 12:04

Email ThisBlogThis!Share to TwitterShare to FacebookShare to Pinterest
Labels: sport

If Wales loses to Japan I might just kill myself. Really.

I'm totally aware that Wales might not win this world cup, what with Gareth Jenkins being a few words short of an expression and all, but lose to Japan? Never! I might start being racist in protest.

Alcahol is a good motivator to run a half marathon I suppose...do you think it might work for the Welsh Rugby team? "If you win/don't get hammered/don't embarrass yourself I'll buy you all a pint". Or maybe they have enough money...that'd be nice!

It took me 4 years to find the World champ athletics over here! It's on channel 151 (Outdoor adventure stuff!) for about two hours every day!!! Chris is spot on on his comments!! But ESPN did show the American rugby team against Irish regional team Munster. They played ok!!!!

ESPN aired the USA-Munster match? Or was it ESPN 8 (The Ocho!), or some such thing?

A night in the pub with the Dubliners is always a good thing. Heard they were headed your way soon. Have one for a fellow Yank who hasn't made it across the pond yet.

Hi Chris - I found my way to your blog today and have tagged you as part of BlogDay 2007 - I have tagged 5 Welsh Bloggers ( or bloggers from Wales!!!) I loved you photo/audio journey it was great :)