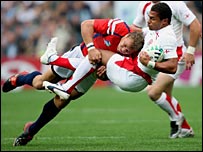 A while back, I suggested that if the United States could score a try against either England or South Africa, they could go home feeling that their campaign had been successful.

With only one match played, the United States' World Cup campaign has been successful.

A 28-10 defeat doesn't really leave one screaming "Do you believe in unlikelihoods?!", but today's USA vs. England match turned out better than I think anyone could have realistically hoped.

First off, we scored a try. Tongan-born Utah resident* Matekitonga Moeakiola trundled across the try line in the 74th minute, which leads to another reason to be happy. In the final, most exhausting minutes of the match, the United States, with only a handful of pro players, appeared more fit and into the match than England's all-pro squad.

Earlier in the day, Japan (the only team the U.S. has ever beat in the history of the World Cup) was clobbered 91-3 by Australia and New Zealand stomped all over Italy 76-14 -- it was generally expected that the United States would meet a similar fate. But instead they held England off and forced them to treat the U.S. as a legitimate threat (something France failed to do against Argentina the night previous). Even the blatantly pro-England announcers found themselves forced to extend respect to the U.S. team by the end of it.

The U.S. should now go into its match against Tonga with a tremendous amount of confidence. Tonga is beatable for them. Afterward, a win against Samoa is unlikely, but not impossible. If those two things happened, though, it would be the Eagles' most successful World Cup ever. Right now it feels just barely maybe possible.

The USA-South Africa match, however, is almost certainly going to be brutal. I think the U.S. goal for that one should simply to avoid getting any players killed.

*Hmm, Tongan-born Utah resident. What religion's he then? Holla, Mormons.
Posted by Chris Cope at 00:23

Tonga, beatable by the US? You're having a larf!

Oh yeah, Rhys, I forgot about that. I wonder how well the U.S. would perform against the Wales side that got destroyed in August.