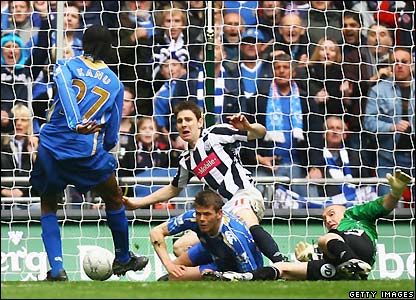 Portsmouth and Cardiff are in the FA Cup final. Anthony, if you are reading this you'll want to read up on these teams because this is the match you will be watching when you and Maggie come to visit. Travelling several thousand miles only to find yourself watching soccer in a pub may seem a bit silly, but this is non-negotiable.

You will be supporting Cardiff City. This is equally non-negotiable. I'm not necessarily happy about it, but supporting the home team is a matter of health and safety in this country. In the United States, it is a cheeky thing to sit in a bar in one team's town and support the other team, but this isn't the United States; people here don't think it's funny to do that. They will hurt you on principle.

For those of you playing along at home, there's this game called soccer, which is really popular over here. They like soccer so much that their leagues and divisions mesh into an incongruous mess that forces the soccer season to be approximately 78 months long.

In America we are used to having ESPN tell us which teams are good, but here they expect you to actually watch loads of matches and figure this stuff out for yourself. I can't be arsed to do that. An easy cheat is to look at who is playing in the semi-final and final matches of three major competitions: the Champions League, the FA Cup and (to a lesser extent) the UEFA Cup.

Diehard soccer fans will split hairs with me on this statement, but that is because all diehard soccer fans are bound by the International Code of Diehard Football Supporters to disagree with anything anyone else says about the game. Bylaw 234 of the code also specifically states that anything an American says about the game should automatically be questioned, even when we make inarguable points like, "Soccer is played with a ball."

Anyway, the FA Cup is kind of big. In Britain (i.e., in competitions that take place solely within Britain), it is the biggest sporting event of the year. And now the two teams representing the cities that tie me emotionally to this country are set to take on one another on May 17.

I was wearing my old Portsmouth jersey as I sat in front of the television Saturday. I kept turning around and stupidly grinning at Rachel when strains of "Play up Pompey" could be heard over the BBC announcers.

Rachel wasn't bothered, and went upstairs to read. Mentally it appears West Brom did the same thing, defeated by Portsmouth's magical ability not to outplay them but simply bore them into complacency. But as Cardiff's Jimmy Floyd Hasselbaink would remark the next day: "It's not how you do it, but that you do it."

Indeed, Cardiff adopted a similar strategy Sunday of playing slightly better than Barnsley, scoring a goal early and then just sort of running about for an hour. Or, at least, that's one interpretation. It really depends on who you were listening to how the match played out.

The Cardiff-Barnsley match wasn't on television, so I followed via the wireless (FTYPAH: "radio"). I started out listening to Five Live's coverage, featuring Alan "I hate David Beckham for no good reason" Green (a). The match was so boring to him that he started commenting on things outside the play, such as what he and the other announcer would be eating during halftime. At some point he looked across the broadcasters booth and spotted a fellow announcer, Malcolm, who was "doing commentary for the Cardiff crowd."

"My goodness, he's really worked himself up, hasn't he?" observed Green.

"Is he? Well, if you speak Welsh, you might want to switch over to listen to Malcolm, because he's clearly watching a match different to the one I'm watching."

So I switched over, and indeed, it was a different match. The same teams were playing, but in this competition Cardiff were not a mid-level Championship team and Barnsley were not close to relegation (b). Instead it was The Greatest Story Ever Told. Cardiff were Cúchulainn (c) against the English horde.

For amusement, I found myself switching back and forth between Five Live and Radio Cymru.

FIVE LIVE: "I'll be honest, with the exception of that goal by Ledley, the standard of play today has been really poor."

RADIO CYMRU: "Crushed in Watford (d), whipped in Toulouse (e), Swansea and Wrexham humiliated and heartbroken, this has been The Most Black Weekend for Wales. But now our Capitol City carries the hopes of a nation. After 81 years (f), Cardiff -- Wales -- are just 10 agonizing minutes from their chance to fight Portsmouth! Their chance -- our chance -- to defeat the English and take from them their cup!"

FIVE LIVE: "...Barnsley have really only had one flash of inspiration in this whole match. Anyway, we have been given by the producers an enormous tin of biscuits, which I can't imagine anyone could possibly consume in a single sitting..."

RADIO CYMRU: "Rise up! Rise up! Now is the time! Fe godwn ni eto! (g) Wales' moment of glory is at hand! We will defeat them! Providence is on our side! The Capitol City ushers in Cymru's Golden Age!"

OK, well, perhaps I'm exaggerating a bit. But the point is, in Welsh it was a much more exciting match. As the clock ticked toward 90 minutes, Radio Cymru's announcer became more and more rapturous. He was at times incoherent. My favourite moment came when the match's four minutes of added play were announced.

Cardiff, the city that so many Welsh speakers are keen to disinherit, is now in the good books. This morning on Radio Cymru, First Minister Rhodri Morgan stated that a Cardiff City win would be more important than the Welsh rugby team's recent capturing of the Six Nations Grand Slam title. And other people were eager to suggest that Cardiff's prominence would be a boon for the Welsh language, despite the fact that Cardiff City can't spell its name in Welsh.

The next few weeks should be interesting as we get closer and closer to the actual match. I will be working on suppressing any natural desire to cheer for Portsmouth. I am resigned to jump on the Cardiff City bandwagon. Indeed, today I plan to buy a Cardiff City scarf. If you're going to superficially cheer a team simply because you don't want to get beat up by its supporters, you might as well do so in style.

(a) I used to listen to England matches online when I lived in the United States, and one thing that struck me was Green's strange contempt for Beckham. Occasionally he would just blurt out, apropos of nothing: "And David Beckham has done nothing!"

(b) A beauty of the British system is that if your team is shit, it gets dropped to a lower division. Imagine if, after sucking it up for a year, the Miami Dolphins were dropped down play against college teams.

(c) Cúchulainn is a Celtic folk hero: A king who once fought off an entire army on his own.

(g) "We shall rise again." It is the motto of the comically inept Free Wales Army, a 1960s Welsh republican movement that was headed by a man authorities described as having "a mental age of about 12 years."

(h) That's a figurative translation. Literally, "bobl bach" means "little people." It is usually shouted in moments of frustration. I have always assumed it to have a folklore connection, cursing fairies (little people) for things going wrong.
Posted by Chris Cope at 11:59

Email ThisBlogThis!Share to TwitterShare to FacebookShare to Pinterest
Labels: Anthony, Cardiff, life in Wales, Portsmouth, sport, Why Britain is better

And other people were eager to suggest that Cardiff's prominence would be a boon for the Welsh language, despite the fact that Cardiff City can't spell its name in Welsh.

Cardiff City Council have problems with spelling the Welsh name correctly as well.

Love it! I saw Malcolm today, adn really wanted to tell him about this (but didn't, of course)

Off topic, but what did you think of Kerouac?

Why the hell you were listening to Radio 5 live! The whole purpose of you staying on our holy soil is to speak, study, learning, breathing and finally make love in Welsh!!

Radio Cymru all the way!!!

When I was a kid I remember listening to Radio Merseyside following a Liverpool game!! On the radio they won the game and watching the highlights later on tv they lost!??!?!

Following the link from Huw's...

Your observations of Alan Green are fair. He really pisses me off when he goes way over the top about how bad referees are.

And as an Englishman, I really hope that Cardiff win the cup. The number of times that I've heard pundits crowing about their (our) affection for Harry Redknapp is perverse. To that, one word: bung.

Please forgive the mini-rant, but you mentioned Alan Green...

Without sounding butt-kissy, that's probably the most entertaining blog post I've ever read about Wales.

(And no that's not being sarcastic!)