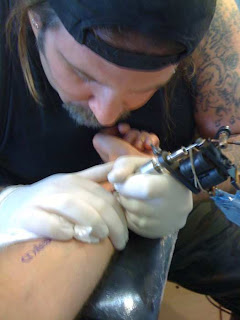 Sara seems to think that I got my tattoo as a result of premature midlife crisis. That is, of course, ridiculous. As are the insinuations that such a thing is also the reason behind my new sports car and hair plugs and 18-year-old girlfriend.

I have to admit, though, that some part of me feels a bit silly. Somewhere along the way, tattoos became an incredibly mainstream thing for people of my generation. Just as we must all own a copy of either "Under the Table and Dreaming" or "four" or both, just as we have all thought we were cutting edge for reading "On the Road" or "Fear and Loathing in Las Vegas" or "The Metamorphosis," just as every female had to have a lesbian experience in college, just as we all had to go through that phase of smoking cigars, so, too, must we all get tattoos.

A bit late, I have finally joined the throng. It's not a comic book villain, strangely irrelevant-to-the-wearer animal, or meaningless tribal design, but it's a tattoo nonetheless.

In my defence, I have wanted a tattoo since I was a teenager. Back when I was 16, I really, really, really wanted to get "HATRED" written across my stomach, just like Pantera lead singer Philip Anselmo. I think most people would agree that wouldn't have gone well. Just the stomach tattoo in general is a risky move; it means having to maintain your abs for life. Because few things are going to earn more derision than a fat old man with "HATRED" scrawled across his tummy.

Also, what happens if you cheer up? Perhaps in that case you could put on some extra pounds -- enough to expand your stomach so as to allow: "Santa's HAT is RED."

Then, for a long while I thought about getting the UT Longhorn logo, but thus far I haven't actually attended the University of Texas (a). Then, for a while I considered getting the letters of my fraternity, ΦΔΘ, but that idea is just beyond lame and, besides, I'm willing to bet £30 that not one of my fraternity brothers would now remember my name.

Bolstered by the awareness that most of my tattoo ideas were ill-conceived, I decided to shelve the concept, taking solace in the fact that I was enough a member of my generation because I know the lyrics to several New Country (b) songs, and I sometimes reference "Cheers" storylines as if they were things that happened to my family members.

And then, last Friday, I walked into Cardiff Ink and politely asked a man three times my size to repeatedly stab me with a needle. He agreed, on condition that I give him money for his trouble and allow him to listen to death metal while doing so.

Actually, I had to make an appointment for this. And it would be a massive understatement to say that I had been bricking it in the days running up to the event. I don't like pain, yo. You might be misled by the various scars I carry and the fact that I played rugby for a few seasons, but really, truly, honestly, I hate hurty things. Especially hurty needle things hooked up to machines. Especially when that hurty needle thing hooked up to a machine is operated by a man who has a picture on his hand of someone screaming in pain and terror.

Contrary to that image, however, Jay was really laid back and apparently very good at dealing with babies. He gave me candy. A cinnamon Jolly Rancher, to be exact -- which is something so rare in this part of the world that it was imparted and received as if contraband.

After we agreed on a stencilled version of my tattoo, I was told to hop up into a modified dentist's chair. My dislike of dentists is well-documented, so I immediately went back to bricking it as Jay went about the slightly surgical process of putting on surgical gloves, setting out a new ink pot, opening a new needle, etc. Then, hovering over my arm he said: "Dude, don't shake your leg like that. Relax."

"OK," I said, completely ignoring him and focusing instead on how unholy pain was about to be unleashed upon my arm.

The tone of his voice allowed me one of those beautiful moments of Zen, in which everything connects. Somewhere deep in my soul all things became clear: Big man with sharp hurty thing in his hand is telling me to stop doing something. And instantly my leg went still.

Shockingly and completely to my surprise, it did not hurt. It didn't tickle, and I might find it a little distracting if I were having sex or trying to ganache a cake, but for the most part it was a wholly tolerable experience. I say "for the most part " because I learned at an inopportune moment that my tattoo artist had spent some time in my home state of Texas. Six years, as a matter of fact. Or "six fucking years," in his words, because they were spent in one of the Lone Star state's fine prison facilities.

"Yah-ho," I said, feeling an oh-so-slight additional sting from the needle. "We should talk about something else. What's the name of this band?"

"Ah, that must be why I can't understand a word of it."

And in a few more minutes we were done. The whole process took less than a half hour.

"Check yourself out in the mirror," Jay said, again showing a brilliant awareness of his client.

Give me candy and allow me to parade in the mirror with my cool new tattoo. This dude had me down. If he had tossed me a hairbrush to use as a microphone and thrown on some Thin Lizzy, I would have paid him extra. As it was, I happily handed over my cash and gleefully shook his hand. I now have a tattoo, yo.

When I was last in Texas, my brother, cousin, uncle and I all got together for some beers and barbecue, and I commented at the time that I felt very much out of place because I had neither a tattoo, nor a story that starts with the phrase: "Well, first time I got arrested..."

Now, finally, I can claim to be a Cope. Of course, I suspect that Shawn Jr. will give me shit for being too high-brow and getting a piece of poetry on my arm. Such is the way with me, I suppose. It would be the same sort of disappointment if I ever got arrested, too.

"Yeah, I got arrested for drinking three bottles of tequila and having sex with a stripper in the sporting goods section at Walmart. But how 'bout you, Chris? What'd you get arrested for?"

"Uhm, well, I was campaigning for Welsh-language rights and I handcuffed myself to the door of a Build-A-Bear Workshop..."
-----

(a) Although, having said that, I realised last time I was in Austin that the UT logo also represents local and even Texas pride. I think that next time I am in Texas with my brother, I will try to convince him to get that tattoo along with me.

(b) That is to say, the style of music that is "new country" -- e.g. Alan Jackson, Montgomery Gentry, Sugarland, Kenny Chesney, et al.
Posted by Chris Cope at 23:10

Email ThisBlogThis!Share to TwitterShare to FacebookShare to Pinterest
Labels: About me, Signs that I am old and busted

I love that you used "ganache" as a verb.

For the record, I have neither a tattoo nor either of the albums you referenced. I must be an anomaly among people our age.

Also, I tend to have a strange reflex reaction where, if everybody's doing something, I totally lose interest in it. It's like the opposite of peer pressure.

Nice neat script/calligraphy/whatever you call it on your tattoo there.
And with it being in a language you understand, you know it says what you think it says. (...as opposed to Chinese pictograms or Hindi which turned out to mean something else entirely, as happened to a couple I know.)

Phil Anselmo never hated "Hatred" tattoo on his stomach. You bloggers are idiots

Jacob, I don't think I said he hated having that tattoo. If you're actually trying to say that he doesn't have they tattoo, check the picture of him I linked to.