Hey what's goin' on? Can you hear that?

I'm not really sure what it is about David Cameron... 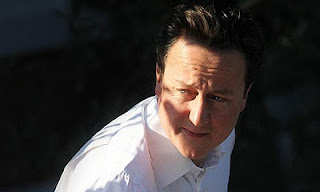 But something about the chap makes me think that having him as prime minister might turn out to be a lamentable decision. Just sayin'. 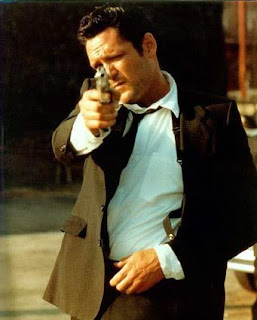 Eight things I'm loving in May

(It occurs to me that the title of this post is misleading, since I am, in fact, writing about things that made me happy in the month previous. But for some reason looking backward doesn't feel as positive as looking forward. "Eight things I was loving" is oh-so-slightly less upbeat than "eight things I am loving." And since the whole point of an eight things post is to be positive, I will stick with the anachronistic title.)

/8/ The days are getting longer for those of us in the Northern Hemisphere and it is especially noticeable way up in the top bits, like Britain. In the summers here the sun holds its grasp well into the evening and almost -- almost -- in and of itself compensates for those horrible dark winter days that sink into a person's soul like eagle talons into the mousy fragility that is a man's personal happiness; it is a sun that inspires badly written run-on sentences. Driving south along the A470 the other night, the sun was setting a little after 20:30, Radio Cymru was playing its one good song a year, and for the first time in a very, very, very long time I found myself thinking: "This is why I moved to this place."

/8/ The ashpocalypse is something I wrote about a while ago: my favourite news item of 2010. Though, until a new cloud sprung up this week, it had more or less slipped from the collective memory rather quickly here on the Island of Rain. I suppose that is, in part. because of the election campaign that's been taking place at the same time. Britain's slightly confusing and occasionally suspicious system of governance is due another peaceful exchange of power 6 May. So, news from a country known mostly just for its quirky but attractive women was inevitably going to disappear in the journalistic ebb and flow. But it did so particularly quickly, I think, because the volcanic ash cloud killed no one. Which is what made it such a wonderful thing.

/8/ Thoughts of a pretty lady I know. She's not Icelandic.

/8/ Swimming is something I'd been telling myself I wanted to do regularly ever since Mark Foster was on Strictly Come Dancing a few years ago. I think perhaps I was jealous of all the attention he was getting from Tess Daly.
"Crikey, I want a woman to eye fuck me like that," I would think. "That Mark Foster is older than me but quite arguably hotter. It must be all the swimming."
So, last summer, when I was travelling around the United States, I borrowed a pair of swimming goggles from my dad and made use of the pools at hotels to work out. I kept this up until I accidentally left the goggles at the La Quinta in Houston. Somehow I never got around to returning to the activity once I got back to Cardiff. But a lot of things were pushed to the side in those ensuing months; divorce has a way of changing your plans.
Then, at the start of last month, I decided I was a bit tired of Cardiff University's gym facilities and joined one of those unnecessarily posh gigantic chain gyms that have a fleet of nifty equipment, padded changing-room benches and a stylishly lit swimming pool. There are also loads of things I am likely to never use, like a steam room, a spa, a Ki studio (what is that?) and a coffee bar (why?). Some part of me laments my having joined such a gym and fears the materialistic, self-absorbed pseudo-libertarian who lives deep down in the most evil part of my soul has secured a little victory.
But my yuppie gym is so much fun!
Twice a week I pick up heavy things and put them back down, and twice a week I go swimming (the other days of the week I run along the River Taff). I'm not a big fan of the whole picking up heavy things, because it is boring and puts me in close proximity to comically huge fellas who smell really awful. My theory is their arms are so huge they don't have the flexibility to apply deodorant. But picking up heavy things and putting them back down is an activity that contributed to my earning a lascivious comment recently, so I stay at it. The swimming, meanwhile, is something I really enjoy.
I chronically suffer from low self-esteem. But having my head under water seriously diminishes my ability to perceive the world around me, which, in turn, diminishes my mind's ability to guess how I am being perceived by that world. So, I can get lost in swimming. I focus on breathing and getting the strokes right and kicking properly and how I am holding my body and so on, and forget about everyone else. I just splash along and think: "This is awesome. I am awesome. I'll bet I look awesome. Any minute now, I'll look up and Reese Witherspoon will be standing poolside. And she'll look at me and say: 'Oh, my. I need to speak to you in the Ki studio. Now. Don't bother towelling off.'"
I live in outrageous hope.

/8/ The new season of Doctor Who has, for the most part, been ass-kickingly good. This Doctor runs more and says wittier things. I'm not sure how I feel, though, about the new series' tendency to do the CSI-style bullet's-perspective thing of suddenly zooming in on a character's eyes so we can go inside their head and pick out some key piece of information from their mind.
ZOOM! Oh, here's a bloke taking pictures of coma patients.
ZOOM! Oh, the space whale loves kiddies.
ZOOM! Oh, those aren't statues.
I have decided I am in love with Amy Pond. If she were standing poolside one day and ogling me I would certainly have no complaints. I found myself screaming at the Doctor for his stupidity in a recent episode when he resisted Amy's lusty advances.

/8/ The Heavy are a band from England, which means they should have crossed my radar long before before the erstwhile Ms. Brown (now Mrs. Pitman) heard them on a Kia advert. But they didn't. Or, rather, I wasn't paying attention when they did. I know that I have heard Huw Stephens singing their praises over the years but I've long suspected that Huw and I are of different minds on what makes good music. Obviously, most people would side with Huw -- he's a Radio 1 DJ, whereas I'm just some guy who yells at his television.
But it wasn't until Renee posted a video of The Heavy on her Facebook page that I listened. Primarily because of her description of the song "How You Like Me Now?" as: "like James Brown with three days stubble covered in bacon grease." You can't argue with that. The Heavy are brilliant and totally undefinable. In addition to James Brown in bacon grease you have songs like "No Time," which I would describe as music to drive your '84 Camaro by on your way to make sweet, sweet starts-in-the-kitchen-moves-through-the-living-room-and-up-the-stairs-step-by-step-before-reaching-the-bedroom love to a woman.

/8/ Anthropology, by Dan Rhodes, is a book lent to me by the pride of Hirwaun. It is a collection of 101 short stories each written with just 101 words. It sounds like the sort of gimmick of which one would grow very tired very quickly; somehow, though, it works. I have been stupidly busy with academia lately, leaving no time for pleasure reading. But with this book I am able to read the little stories as I wait for my toast to pop up in the mornings. For example:
Faithful
My girlfriend died. I was heartbroken, and vowed to remain faithful to her memory. At first I had no difficulty; my distress was so great that I couldn't even contemplate kissing anyone else. But, after a while, another girl started showing an interest. 'You're very pretty,' I told her, 'but it's just too soon. I'm sorry.' She wouldn't give up. She kept gently touching me, and fluttering her mascara-coated eyelashes. Eventually I yielded, and fell into her arms. The man asked us to leave. He said our rustling, slurping and giggling was upsetting the other mourners.

/8/ The academic part of my masters degree is coming to an end in a few days. After that I will need only focus on the novel I am writing for my dissertation. In honesty, the whole reason I applied to do the masters was so I would have an opportunity to write a novel and receive guidance and feedback whilst doing so. After a very long, mentally and emotionally exhausting eight months, I am finally now getting a chance to do that.