Strictly week 3: All aboard the J-Train 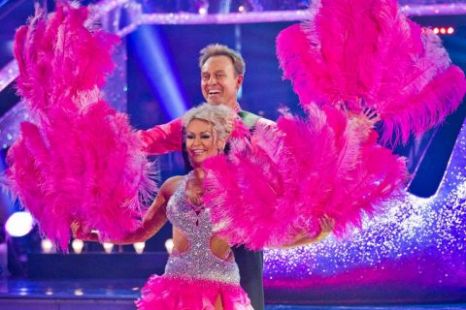 Let's mark this past weekend down as the one in which I finally agreed with the judges about Jason Donovan. After the absolute brilliance of Russell and Flavia dancing to Barbara Streisand, I was pretty sure the third verse was going to be same as the first in terms of finding myself again starting a 'Strictly Come Dancing' recap with nothing but praise for Queen Russell. Where do you go from there? How do you possibly make it better? The J-Train had the answers, making a finger-wagging, tush-shaking stop in Campville. And the gauntlet was thrown down, bitches.

The J-Train is obviously here to win. And if winning means cranking the Big Gayometer to 11, you can bet your ass the Antipodean dance warrior is going to 11. That's not to say Queen Russell was anything other than amazing. Indeed, many of the couples seemed to step up their game this week. Whether it was Harry deciding to leave his shirt at home or Holly strutting about in little more than pantyhose and electrical tape, the celebrities were selling it.

And, for the most part, Jenn and I were buying. Here's a look at this past weekend, starting with the exiting couple.

Nancy Dell'Olio and Anton Du Beke ~ Tango ~ 20:
Nancy puts the 'bat' in 'batshit crazy,' doesn't she? If the British tabloids are to believed (which, I doubt they are) she is a boozing, ego-maniacal, hot-tempered diva who hates her dance partner because he won't make a pass at her. Let's assume that's not totally true; but it's relatively easy to see how one could come to such conclusions. After conveniently not dancing through the first 30 seconds of her routine (which Anton later tried to sell as 'hard to do' on 'It Takes Two'), Nancy then stomped around the dance floor like Lainie Kazan's drunken id made flesh. Immediately after the performance, she went straight over to flirt with Brucie, not so much as even glancing in Anton's direction, nor waiting for him to join her in the walk over to listen to judges' comments. If she's not insane she is still unlikeable. I look forward to her departure.

Audley Harrison and Natalie Lowe ~ Quickstep ~ 20:
Being roughly 78 feet tall and weighing 52 tonnes, it was unlikely Audley was ever going to produce a stunning quickstep. What he managed here was the best anyone could hope for: successfully embracing the spirit of the routine. No, he wasn't dancing particularly well, but you could tell he really wanted to be dancing well. And that's sort of half the battle at this stage.
On a side note, I would like to thank the BBC costume department for locking Natalie out of her dressing room Saturday, thus leaving her with no option but to wear whatever came to hand, namely a handful of serviettes and some mosquito netting.

Lulu and Brendan Cole ~ Rumba ~ 26:
A number of people after the dance described this number as 'beautiful.' Is this one of those 'bad' means 'good' sort-of things, in which 'beautiful' actually means 'creepy and disturbing'? If so, then, yes, I totally agree: it was beautiful. I like Lulu about as much as I like stomach cramps.
Also, it's worth pointing out the lift. In last week's 'Choreography Corner' (sweet baby Jesus, did I just write that phrase without irony?) on 'It Takes Two,' Karen Hardy said that when Brendan gives up on his partner he simply picks her up into the air. And what happened this week? Illegal lift, yo. Brendan's given up on Lulu -- so, too, should the viewing public.

Anita Dobson and Robin Windsor ~ Jive ~ 27:
In that wig, Robin looked like Harry Connick Jr.'s stupid brother. The whole thing had the feel of a parade float having broken loose and careening down a hill toward a raging Sandinista gun battle. Aboard the float, the performers know they are going to die but decide to give one last performance, to jive their way to bullet-riddled glory. So, there's Anita: trying desperately not to fall over on the out-of-control float, bracing herself for the deathly sting of hot lead, frantically working toward the climax of the routine before coming into the crossfire. And looking so darn likeable doing it. I mean, gosh, how can you not want her to do well? So, go on Anita! Dance wildly to your doom!

Russell Grant and Flavia Cacace ~ Foxtrot ~ 28:
At just 10 seconds into this dance you knew it was going to be, if not technically the best dance, the most enjoyable performance of the week. Because 10 seconds into the routine Queen Russell flips a parasol over his shoulder and hits the audience with a glare that says: 'IT'S RUSSEL MUTHAHUGGING GRANT, BITCHES!'
Then, bedecked in an all-white suit like a gay version of Will Varner in The Long, Hot Summer, Queen Russell takes two steps, sweeps his foot seductively and again flashes the audience a look; this time the look says: 'You are loving it.'
You bet your sweet biscuits we were loving it, darling. I have since watched it again at least six times. Each time I feel joy. I particularly liked this dance because there is a bit more partnership between Flavia and Russell. Yes, he's stealing the show but seems to be drawing her into the routine, saying: "Come on, honey. Let's ride this ridiculous wave together."

Chelsee Healey and Pasha Kovalev ~ Cha Cha Cha ~ 30:
I liked the music. Everything else, however.... Meh. Tits McGee is still, to me, just a chavy hot mess whom I dislike a little bit more each time I see her. What's with her crazy pound-shop-bought Beyonce wig and Hamburglar face? Ugh. Ugh. Ugh. Jenn, on the other hand, is less cruel and insists it was an OK dance. Though, she couldn't help notice that in the shoes worn Saturday, Chelsee looked to have horse feet.

Robbie Savage and Ola Jordan ~ Tango ~ 30:
Robbie's growing on me. A bit. I still don't like him but I would, at least, discourage people from throwing things at him. The thing with the chair made no sense, in which he picked up a chair, did a little turn, thrust it away from him, did another little turn and defiantly set the chair back where it had been in the first place.
"You want chair? Robbie give chair! You no want chair? Fine! Robbie take back chair! You no get chair! Now Robbie dance with pretty Polish girl! Stomp! Stomp! Stomp!"

Holly Valance and Artem Chigvinstev ~ Tango ~ 30:
As mentioned above, Holly chose to go all Blue Peter this week and make her dress out of pantyhose and electrician's tape. I can't decide whether it was as sexy as I'm pretty sure the costuming department expected it to be, but I'm not complaining. However, the routine was flawed from the beginning by the song choice: 'Cell Block Tango' from the musical Chicago.
At the start of the song, the singer says the name 'Lipschitz' several times, leaving a viewer to wonder whether saying, 'lip shits,' over and over really is acceptable pre-watershed material. As a result, I was distracted through the beginning. Then there's Holly missing a step and getting her heel caught in her dress. Good recovery and all but...
I guess what I'm trying to say is I feel a little disappointed in the fact I'm not perving on Holly as much I think I should. I don't really find I want to do naughty naughty things in a shed with Holly Valance and for this I am placing the blame squarely on her shoulders.

Rory Bremner and Erin Boag ~ Quickstep ~ 31:
Every. Single. Damn. Time someone does a quickstep, the judges namecheck Fred Astaire. Rory looked nothing like Fred Astaire. He did, however, look alright. It was easily his best performance so far. But still there wasn't a great deal to pull you in, to make someone want to vote for him. It felt like a very good drawing on a styrofoam cup.

Alex Jones and James Jordan ~ Viennese Waltz ~ 32
The fact James was dressed a bit like the Joker confused me slightly, but once I got over that I found it to be a pretty good dance. I've watched six seasons of Strictly and I can only think of one Viennese waltz I actually enjoyed watching, and at the moment I can't remember who performed it. Ali Bastian, I think. Point is: it's not the most exciting of dances. This coupled with the fact that, at times, Alex was making a face like a trophy wife trapped in a loveless marriage who, when called upon to suffer wifely duties, lies back and thinks of Cymru. I can't decide whether I think Alex will blossom into an amazing dancer, or simply follow the lead of her national rugby team and be good, but not good enough.

Harry Judd and Aliona Vilani ~ Jive ~ 33:
I am boycotting Harry Judd this week due to the rapturous teenage squeals his shirtless performance induced in my girlfriend. Jenn was kicking her legs in the air and giggling with lusty delight, so, of course, I hate him now. And his abs.

Jason Donovan and Kristina Rihanoff ~ Tango ~ 36:
Would you like a little awesome sauce with your awesome sandwich? Why not? It's complimentary on the J-Train buffet car. I still think the J-Train makes silly, Ricky-Groves-esque faces but there's no denying he's set himself out as the one to beat in this series. I particularly liked the way he looked as if he was shouting right before launching into little sequences. He would grab Kristina into hold, they would snap their bodies taut and then launch forward with him mouthing: "Hooah!"
I love that kind of thing. I frequently (far too frequently) daydream of being on Strictly and have long promised myself I would shout all the way through my tango and paso doble. Thank you, J-Train, for living that dream for me.