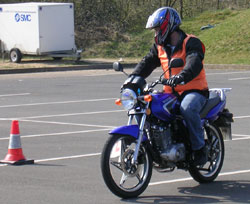 "The transmission on this thing is kind of fubared," I say, trying to jam the bedraggled Yamaha back into first gear.

"Well, give it a bit of time, Chris, I'm sure it will come to you," says the bloke stuck watching me stall out the 125cc bike as I attempt to do circles in a car park.

He doesn't believe me. But then, why would he?

Kick, kick, kick. Clutch out, clutch in, clutch out. Roll back, roll forward. Kick, kick, kick. Finally, the neutral light goes out and I return to the all-important task of perpetually turning right.

"See if you can get it up to second in the straight, Chris," he shouts.

I am doing my CBT –– Compulsory Basic Training –– the first step in the prohibitively complex process of becoming fully licensed to ride a motorcycle in Her Majesty's United Kingdom of Great Britain and Northern Ireland. The CBT is shaping up to be very much like the whole of the licensing process I went through in Minnesota when I was 18 years old. In that process, I was required to watch a film, then listen to a dude with a mullet explain the benefits of wearing leather before being led out to a parking lot and explained the bits of a motorcycle. Then I drove around some cones for half an hour and was handed a piece of paper saying I was legal to ride.

In Britain, this is just the beginning. There are several more steps after the CBT: at least three days more training and four tests.

Paul, my instructor, has already spoken to me on the virtues of wearing a helmet and protective clothing. He's not keen on leather. A large man with just a slight lilt in his accent that reminds me of Matt Baker, but with the Welsh valleys habit of incorporating into every sentence the name of the person to whom he is speaking, I get the sense that in a more social situation he might be disparaging of motorcyclists who prefer leather, might suggest they suffer from some kind of fetish. No such sentiment has been actually spoken by Paul but I still feel silly for having shown up wearing a leather jacket.

On the positive side, he did commend me for my extensive knowledge of the Highway Code.

I have been going around in circles for roughly 30 minutes, in a car park that is no more than 50 metres in length. I struggle to accept that there is actually enough space to get into second gear before needing to drop back down to first for the corner. After stalling the bike half a dozen times attempting to downshift I decide I will just get the damn thing into second and keep it there.

"Very good, Chris. Up to third when you're comfortable," Paul shouts.

For those of you playing along at home, the gears on a motorcycle are manipulated by your left foot. You pull in the clutch with your left hand and move a little lever up or down accordingly with your foot. Bafflingly, the gears go like this: 1 N 2 3 4 5. (Many bikes have a sixth gear) Because the transmission on the bike I'm riding is awful, I am occasionally mashing it into neutral when I downshift. This isn't a terrible thing, but the high revving that results from throttling up when I think I'm in gear is, I know, communicating to my instructor that I'm an idiot.

I decide to go with the trick of simply keeping it in third. I am now whipping around the car park in a tight circle that make me think of the Cage of Death that was a requisite part of circuses when I was a boy.

Paul signals for me to stop. I bring the bike to a halt roughly 6 feet away from him, still having not yet adjusted to the shorter stopping distances of a motorcycle. He has me get off and asks that I simply watch as he demonstrates emergency stops.

"Oh, sugar," he says as he putters the bike toward the end of the car park. "These gears are a mess."

Paul allows me little time to revel in this victory and has me guess how much distance he'll need for an emergency stop. Again I gauge it based on how much space I'd need to stop my bicycle. I overestimate by roughly 10 feet. The hard stop throws the transmission forward and Paul struggles to find neutral.

"Bit of a trick, that one," he says. "We had someone drop it the other day. Have to get it looked at. But if you want to hop on, Chris, and give the emergency stop a go."

I ride the bike to a corner of the car park, turn around and come at Paul as fast as I can. He stands there like a matador and raises his hand, signalling me to stop.

"Looking for control here, Chris," he says. "We'll give it another go."

I do it again with lesser chaos. It was after this part they gave me my motorcycle endorsement in Minnesota. In the car park of Whitchurch High School, however, Paul just sets up some cones. I do figure 8s and slow cornering and pretending to check for traffic. After a few minutes of this we have our fourth tea of the day, and Paul bolsters my confidence by complimenting my sense of balance. I sign a piece of paper I don't read but that I am certain absolves 1st Class Rider Training of any and all responsibility should I get myself killed. Then we head out onto the road. The actual road full of actual cars.

If you have never driven in Britain, the basic rule here is: PAY ATTENTION TO ALL THE THINGS. There are roughly 32 million cars in this country, squished into a space smaller than the state of Oregon (population 3.9 million) and driving through towns and cities that, for the most part, were laid out long before anyone even imagined a car. Maneuvering the country's narrow roads is a challenging and stressful experience. Especially so when you are sitting on an unfamiliar and mechanically touchy motorcycle, and have the slightly Matt-Baker-sounding voice of God echoing through your skull.

I have jammed a radio earpiece into my helmet so I can hear Paul's instructions as we move down the road. His voice is calm, soothing, but equally unnerving because, you know, it's in my head. Having long been one to toe the line of sanity, I am quite used to having voices in my head, but generally they are aware of one another. In this case, Matt Baker God doesn't seem to be listening to what everyone else in my head is saying. It's off-putting.

Because I cycle to work every day, I've gotten really good at quickly identifying and assessing the various hazards on the road.

Matt Baker God is identifying all the things I've seen already but in a different order. Because he is inside my head, I can't help assuming he has heard the other voices already and is now identifying new aspects of the hazards. Perhaps the old lady is armed, or the cyclist on fire. My adrenaline level cranks to 11, my eyes dart around fearing I have missed something and that a very hurty collision is imminent. No. Nothing new. In the confusion I make an awkward downshift.

British people love speaking in acronyms and Paul has spent the day offering me a hearty alphabet soup for which I cannot remember the significance: OSL-PSL, PINS, BOLT, and so on. I am now past the point of even considering trying to recall the meaning of ABC (1) and simply bring the bike to a lurching halt 10 feet short of the line.

"Drivers are easily confused, Chris," says Matt Baker God. "Stop that short of the line and they're liable to try to come 'round you, which can be very dangerous."

It goes on like this for an indefinite amount of time. Matt Baker God's perception of the world is oh-so-slightly different enough to add more confusion. When he tells me to turn "just past that tall tree," for example, I temporarily get lost in an internal discussion of what qualifies as tall amongst the four equal-sized trees ahead of me.

At a roundabout, I spot a woman completely unaware of my presence. Almost by accident, I honk at her, which emits a pleasantly surprised kind of cheer from Matt Baker God.

"Clever use of the horn, Chris."

I get lost in the immediacy of my actions –– assessing and responding to all the things, doing whatever Matt Baker God tells me –– and become wholly unaware of my geographical position. Eventually I find myself being directed into a McDonald's car park in a boxy retail park. I have no idea where I am; I can't even guess.

"We'll get something to eat here, Chris," says Paul. "Sun's out. Want to sit outside?"

Any time the sun shines, the British insist upon pretending it is summer. It is 7C (44F) and I am physically shaking from cold and adrenaline; I would very much like to sit somewhere warm and close my eyes for a moment. But because I have trained myself to simply respond to Paul's voice I nod in agreement. I buy MgNuggets and fries and consume them in greedy handfuls. This is the first time I have eaten at a McDonalds since 2005. I have missed out on nothing in the interim 8 years.

Lunch over, we get back on the bikes and head out.

We reach a section of country lane, then out past some fields. I push the little Yamaha to 55 mph, which is about all she will do. The throttle is rolled all the way back. The wind blows cool through my helmet. The gas tank is cold against my thighs. The cantankerous machine I have been swearing at all day melts away and now I am just gliding past rolling green. There is no real sense of controlling a mechanical thing; it moves almost on the power of my thought.

We turn onto Thornhill Road and head down, into Cardiff. My heart sinks a little because I know we are on our way back. Soon we are heading into Whitchurch Village and Matt Baker God is directing me to the car park of Whitchurch High School.

"A very good ride there, Chris," says Paul after I cut the engine. "I'm quite happy with that."

We go back inside the no-heat classroom and he fills out a piece of paper. He shakes my hand and that is it. I have my CBT; I am licensed now to ride a 125cc motorcycle –– under certain restrictions –– and free to carry on toward becoming fully licensed. There's a long way to go yet, but I know it'll be worth the effort.

(1) Accelerator, Brake, Clutch - the order of things to pay attention to when stopping. After, of course, checking my mirrors.
Posted by Chris Cope at 10:38

Email ThisBlogThis!Share to TwitterShare to FacebookShare to Pinterest
Labels: life in Britain, motorcycle

Wonderful. What a day it must have been.

you kept me on the edge of my seat this whole time.

Congrats on your pass