I hate to say I told you so, but I told you so: Deborah and Patrick found themselves in The Dreaded Dance Off last weekend, as I had predicted.  I'd argue that last week's dance was her strongest so far, but I think it was too little too late. There wasn't a great deal about her performances that made you think: "Ooh, I want to watch this." Patrick, meanwhile, found himself in the bottom two because many Strictly viewers are latent racists.

Overall, it was a good week, but I felt there was a bit too much not-dancing taking place in a lot of the routines. Anyhoo, here's a look back at the scores, starting with the exiting couple and working up the leader board.

Deborah and Robin -- 27
Their Viennese waltz included a brilliant advert for the functionality of Ikea tables, but I didn't quite understand why a piece of furniture was so heavily featured. Additionally, all that fussing about with a table ate up a solid 40 seconds of their minute-and-a-half routine. When more than a third of your performance is obvious filler, there are problems, yo. After last week's befuddled jive in nurse shoes, this performance showed that Deborah and Robin were running out of ideas.

Dave and Karen -- 17
He can't even shake maracas, for the love of Pete. Dave is so rhythm-deficient that one almost feels the need to set up a fundraiser to help him seek medical attention. The first part of the dance featured Dave awkwardly attempting to shake maracas via movement in his elbows rather than his wrist. This action seemed to consume so much of his brainpower that he effectively stood still as Karen zipped all around him. My new rule for Dave's dances is that if he doesn't steal too much of my attention away while I'm perving on Karen then it's OK. This was not OK. Dave's debilitating maraca crisis was utterly distracting to the point of worrying about his safety. I found myself thinking: "Just put the maracas down, man! You're going to give yourself a brain hemorrhage thinking that hard."
Oh, and the conga. He couldn't even get the conga bit of his dance right. Jenn was livid.

Rachel and Pasha -- 22
Oh, poor Rachel. This paso doble just didn't work out. She was trying to look fierce but instead came off looking like a drunken chav girl who is having an intentionally vocal and public row with her boyfriend in the middle of the street. Still I voted for he because she looked so sad when she saw the judges' (somewhat harsh) scores. I really want her to be better. I hope she can come back from this. I suspect, though, she won't.

Ben and Kristina -- 27
Hey! Let's start this dance by running to a couch and sitting down! Danger, danger, danger, my friends. Nothing more clearly communicates to the audience your inability to do something than your blatantly not doing it. Fortunately, Ben and Kristina only ate up 20 seconds with their sitting and throwing popcorn at each other (had they been consuming popcorn and port I would have sued for copyright infringement). Thereafter they got into hold quickly and it became somewhat apparent why they had chosen to spend some of the performance sitting: Ben was a pretty heavy in his footwork.

Mark and Iveta -- 28
Jenn and I spent most of the dance just admiring how pretty Iveta looked in her dress. Whate else I remember of the dance is that Mark looked utterly despondent. I'm not sure what the exact story of the dance was supposed to be, but the misery on Mark's face before Iveta shows up and after she walks away made me think he was playing the role of the bloke in Johnny Cash's "Long Black Veil," getting do dance with the ghost of his murdered wife. But then, I tend to have very dark interpretations of things.

Patrick and Anya -- 28
I've long held the unhappy belief that a good number of Strictly viewers are just a little bit racist. Not overtly so, else they wouldn't have supported Alesha Dixon's win back in 2007. But I can't help but notice that, overall, blacks don't do terribly well on the show, often finding themselves in the Dreaded Dance Off multiple times (e.g., Heather Small was in the bottom two some four times when she was a participant in 2008; Michelle Williams repeated that feat in 2010). My feeling is that unless a black person is awesome he/she will find themselves dropped sooner than a white person of equal ability. And Patrick's dance this week was particularly un-awesome. Fair enough, that was the result of their having to change the dance at the last minute to accommodate for his sprained wrist, but it was still so... meh.
Sophie and Brendan -- 30
What the hell was going on with Brendan's outfit? There was just so much nope. It's like he stumbled into the costume department in the dark and got dressed in a panic. So he found himself on live television wearing a pair of two-tone wingtips, a pair of not-long-enough tracksuit bottoms, a black tank top and a sleeves-rolled-up sport coat straight out of the Don Johnson collection. It's no wonder Sophie looked a little unsteady in this cha cha cha; she was put off by the great fashion atrocity taking place in front of her.

Fiona and Anton -- 30
Twenty seconds of sitting down. Again. And again I say no. It's called "Strictly Come Dancing" not "Strictly Come Sit Down And Mime." On the positive, once Fiona and Anton got up they launched straight into a solid quickstep that had the added intrigue of a blue hanky that kept being produced and returned to Fiona's cleavage.
Fiona's a Bond girl, by the way. Did you know that? They don't mention it much on the show. But it explains the strange orange mummy/martian who wished Fiona good luck. His name is Roger Moore. He played Bond at one point then magically aged to be 900 years old.

Ashley and Ola -- 31
I didn't feel Ashley was really dancing here, so much as doing a lot of steps. But, to his credit, there were a whole lot of steps. And that made their jive impressive -- especially when he threw himself to the floor and slid between Ola's legs. That looked like the sort of thing that could result in injury. The same could be said for his leaping over her shoulders. But overall, it was an energetic routine that lacked a feeling of energy. It was like the difference between running for fitness and running from a bear; both are physical acts but one has more meaning. Here, Ashley was running for fitness.

Susanna and Kevin from Grimsby -- 32
This was quite a lot of good in my opinion. Susanna was the physical representation of sunshine from the very beginning. Their American smooth seemed an homage to the saccharine playfulness of Doris Day musicals and I enjoyed it. That sort of happy, cheerful performance is why I watch Strictly. Well, that and all the cleavage. Also, how cute was Susanna in the little video piece before their dance, when she and Kevin went to his parents' dance studio and she gave all the little kids a hug?She got a vote from me just for that.

Abbey and Aljaz -- 35
Ugh. They're so beautiful. I can't stand them. And I don't mean sexy, I mean beautiful. Annoyingly beautiful. Watching their foxtrot was like watching an ad for cologne, the major highlight being the fact that the Dave Arch version of "Dear Diary" is better than the original Olly Murs version.
In honour of Aljaz's continued presence in the show, here's Slovenian Fact #6: Last Thursday (31 October) marked Reformation Day, when Slovenians commemorate the first books published in the Slovenian language -- during the 16th century Reformation.

Natalie and Artem -- 35
She's so good. I especially loved the fact she was giving such good samba face: the way she was looking at the audience and appeared to be mouthing, "Ooh!," "Hah!", and lowering her eyes as if to say: "Look at this. Look at all this sexy going on up here. You see this? You see what I got? Ohh! Hah! Bam, I am am so hot."
I see it. And you are Natalie, you are. Despite the fact that your dress made it look as if you were wearing a harried flamingo. 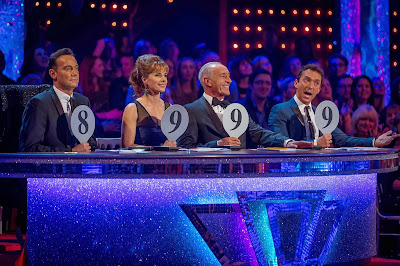 ELSEWHERE:
--- When do you suppose we'll see the first 10 from a judge? And who will receive it? The obvious guess, I suppose, is Natalie.
--- Kristina's boobs are so strange. They're like separate entities; just two large balloons that have been pasted onto her chest.
--- Respect to Craig for being on the show a week after a hip operation. And respect, too, to the Strictly props team for giving him and enormous glittering chair to sit in. I love it when he plays the role of pantomime drag queen villain.
--- That dude from Earth Wind & Fire can hit a motherhuggin' falsetto, can't he? Wow.

WHO WILL BE IN NEXT WEEK'S BOTTOM TWO:
Unless she really pulls something out of the bag, I think Rachel may again find herself in the Dreaded Dance Off next week. There with her, I think it may finally be Fiona. I suspect it will be the classic scenario of Fiona performing OK and people not really voting for her as a result.

THE FINAL FOUR:
I'm expecting to see Natalie there, along with Ashley and Sophie. I am struggling on who I think will make up the group of four. I don't really think Abbey has it in her to carry on that far. But, I'll put her in the list just to make up the numbers.
Posted by Chris Cope at 14:43 No comments: