That time Jenn and I went to the beach 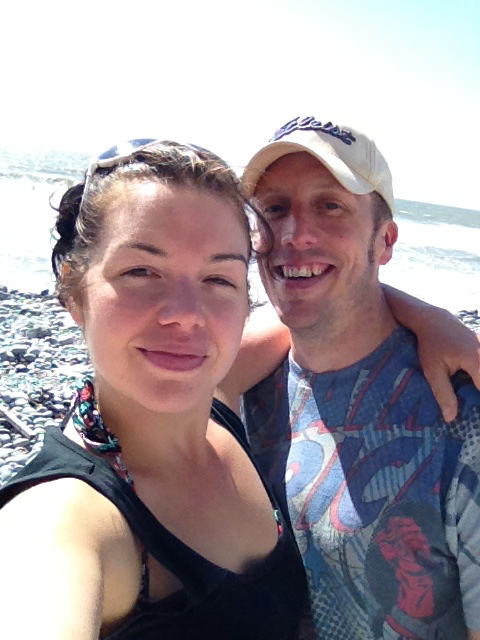 When I got my motorcycle license back in 2013, it started to change pretty dramatically my interaction with Britain and my attitude toward living here. I carry some entrenched (and possibly unresolvable) bitterness toward Wales, but owning a motorcycle has helped soften that. Because it means not being stuck in the same place, seeing the same things.

I particularly love when Jenn comes with me somewhere. This doesn't happen too often, because a) it's not terribly interesting to just sit on the back of the bike when I'm riding without any specific destination in mind; b) Jenn seems to get cold easily; c) Jenn is not the sort of person who enjoys sitting still –– even a 100-mile car journey will make her restless.

But when we do go places I always enjoy it.

On 3 August 2013, we were enjoying an unusually hot summer in Britain, so Jenn and I hopped on my Honda and rode to Southerndown, about 20 miles away. We spent the afternoon swimming in the sea, playing in the waves, and it was one of the best summer days I had to that point ever had in the UK.

Forgotten photos: That time we all went to Dublin

I have a load of photos sitting on my computer that I've never really shared. Lately, I've started trying to put them up on my Flickr account with the backlog of pictures currently being some two years. And when I say "lately" I mean that I came up with the idea of doing this exactly a year ago, uploaded a few and forgot about it for another year.

This is the way my life is now. I go into long sleeps of depression and wake up during summer vacations, filling my head and heart with promises of making changes. Then another year goes by. Make no mistake: I hate living in Wales. I am deeply concerned that it may be killing me.

But I stay because of the lady in that picture above. I love her immensely. Two years ago today, we were married on the hottest day of the year. It also happened to be the best day Wales had experienced in at least 6 years.

A day or so after the wedding my father took the whole family to Dublin, myself having been the only one to have ever been there. Dad paid for the six of us –– himself, my mother, my brother, his girlfriend, Jenn and me –– to stay in a penthouse in the centre of Dublin. We were at the very top floor and had an amazing view of the city.

Because I had been to Dublin before and because I am dumb, I didn't take many pictures on this trip. I wish now that I had. I suppose the benefit of uploading photos from two years ago is that it gives you a greater perspective, and I wish now that I had been more "in the moment." But in the moment I think I felt just a little silly about having my whole family come along on Jenn and my honeymoon.

Though, we didn't really think of it as our honeymoon. Indeed, I'm not sure we've had a real honeymoon yet. Money. But with the benefit of hindsight, this trip to Dublin –– whatever you call it –– was a lot of fun. Thankfully Jenn thought to grab my camera for a few photos.