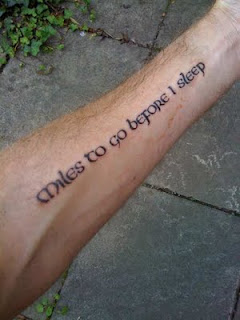 "Whose woods these are I think I know.
His house is in the village though;
He will not see me stopping here
To watch his woods fill up with snow.
My little horse must think it queer
To stop without a farmhouse near
Between the woods and frozen lake
The darkest evening of the year.
He gives his harness bells a shake
To ask if there is some mistake.
The only other sound's the sweep
Of easy wind and downy flake.
The woods are lovely, dark and deep.
But I have promises to keep,
And miles to go before I sleep,
And miles to go before I sleep."
- Robert Frost

Every year, my mother takes a squadron of Catholic-school teenagers to the far reaches of Northern Minnesota and attempts to get into their heads the importance and value of such far away places. It's debatable whether that message is received; when you grow up in Minnesota it is hard to imagine the rarity and beauty of somewhere like Minnesota. It is only when you get to live in places like Britain, where it is impossible to stand at any one point and not see signs of civilisation, impossible to go on a hike and not encounter at least one other person, that you start to appreciate that wilderness that my mother drags stroppy suburban teenagers to experience.

Once, when I was a stroppy suburban teenager not too much older than those taught by my mother, I went along on the trip as a chaperone. My memory, especially as pertains to the decade spanning from age 16 to 26, is notoriously poor, so I don't actually remember much of the trip. I can't imagine that I was particularly adept at chaperoning; but since I can't remember either way, I will report to you that I performed my duties marvellously.

But one thing I do remember clearly: Lying in the snow.

Deep into the woods, the naturalist leading my little gaggle of teenagers on a hike had us all lie flat on our backs -- perfectly still, totally quiet. My body crunch-sank into the deep Northern Minnesota snow and suddenly everything in the universe slipped away. There was only my breathing, the chill on my lips and the infinite sky blue sky through arthritic fingers of leafless branches.

I lay there: stunned by it, absorbed by it, lost in it.

After I-don't-know-how-long, the naturalist's face came into view. She smiled at me and extended a hand; it was time to move on and go look at owl poop, or something equally as exciting.

The moment burned into my emotional memory. It became a moment -- a feeling -- that I long to return to in difficult times. And during The Very Bad Times of recent years, that longing became almost constant. I walked around feeling weak in my legs and waiting, yearning, for that moment when I would simply collapse to the ground and the universe would slip away. In the nebulous world of depression, the desire for the cold solace of winter would mesh into an ache for the endless peace of death.

That's the way I interpret Robert Frost's poem, "Stopping by Woods On a Snowy Evening." The quiet nothingness appeals to the narrator, it lulls him. Death is singing its love song. There is no life on a snowy winter evening -- only the infinite gentle stillness.

But then his horse, his conscience, his soul, his hope, shakes and says: "This isn't where we belong. We're not there yet." There are promises to keep. The promise of what you can become.

So, for a long while during The Very Bad Times I would wake up each morning and write on my forearm with a Sharpie: "MILES TO GO BEFORE I SLEEP." To remind me, constantly, that I had to keep going.

Roughly three years later, I feel the strength of my legs when I walk. The little horse of my soul is eager to drive forward -- eager to see where I will go and what I will do. But the words of the poem are still relevant. They always will be. So, on Friday, I decided to make them permanent. I got my first tattoo.

Email ThisBlogThis!Share to TwitterShare to FacebookShare to Pinterest
Labels: About me
Newer Posts Older Posts Home
Subscribe to: Posts (Atom)