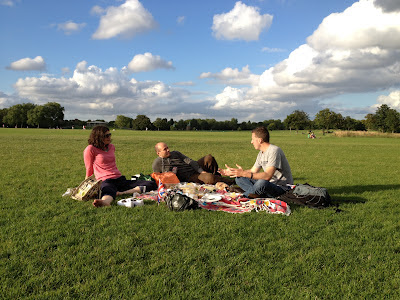 This is what I tell myself each time I visit, at least. London really is the best city on the planet. This is not an arguable point. It may not be the best for you -- it's entirely fair to question whether the UK's capital would be the right fit for an individual. But in all the ways one can objectively measure a city, London is the best. And every time I'm there I get this worried feeling in my gut, thinking: "Isn't this where I should be? Am I hurting myself -- creatively, career-wise -- by failing to move here?"

It is false to claim that Wales has not one single writer of note, but certainly it's true that London has more. Not just numerically but per capita -- it's not simply a matter of more people producing more stuff. Creatively, London produces a hell of a lot more, and of considerably better quality. That's not surprising. Ideas beget ideas; that's long been a happy side-effect of major metropolitan areas. And since I dream (perhaps naively) of being a great writer (whatever the hell that means), I often worry that I am damaging myself by not throwing myself into that great, swirling city.

I suspect I would last two years -- maybe three -- before London started to burn me up. Cities' energy come from their inhabitants, even those who have little energy to give. Cities take and take and take. They are great nuclear furnaces fuelled by people's ambitions/hopes/capabilities/etc. Some people thrive and can live their whole lives in such a place. Indeed, some people could live no other way. I think it is realistic to assume I would suffer a mental breakdown if I stayed too long. But I would like to have that short time before it all got too much. I feel like being there would somehow propel me to that greatness of which I am always dreaming.

But one does not simply walk into Mordor London. It costs money to live in the Big Smoke. I estimate my annual income would need to increase roughly 500 percent for me to even have a chance of surviving those hypothetical two years. So, for the timebeing I'll have to stick with visiting whenever I can.

Jenn and I went to London over the weekend, hoping to get a sense of the Olympic atmosphere. We were not disappointed. In every Tube train at least one of the volunteers could be spotted on his or her way to or from a shift at the various Olympics venues around town. Televisions in every pub were airing the BBC's ass-kicking coverage (I feel sorry for those of you back home, stuck watching NBC's substandard coverage). Union Jacks were fluttering everywhere. Team GB paraphernalia was surprisingly commonplace. And to everyone's absolute amazement, the transportation network was coping just fine. Indeed, I can remember no point in my life when London's Underground has run more efficiently. In your face, Mitt Romney.

We got into the city a little after 8, with me still buzzing over the fact we had watched some of Rebecca Adlington's bronze-medal swim on Jenn's phone. Watching the Olympics on a phone! Yes, I knew you could watch video on a phone -- waiting an exhaustingly long time for it to buffer so that whatever relevant point you were trying to make in turning to YouTube has long since slipped into the ether. And yes, I know that Joe Dunthorne tweeted about watching Wimbeldon on his phone. But since I am saddled with an insufferably shit HTC Desire (a) and live in the coverage hinterland that is Wales, I had never even thought to attempt livestreaming something on it. But there Jenn and I were, watching live swimming on her iPhone. The future is now!

We stayed with our friends, Dave and Jen (henceforth to be known as American Jen, to avoid confusion with my fiancee, Devonshire Jenn), in north London. There was tacos and talking and booze and Olympics and we didn't get to bed until 2 in the morning. This is the way with trips to London. Conversations carry on into the night, and ambitious plans for early-morning activities get dropped.

We got up around 11, made a big breakfast of pancakes, eggs, and bacon, and set out for Hyde Park to take part in the fun of BT London Live. My understanding of the (sometimes) free event was that it had gigantic TV screens upon which one could watch the Olympics, and stages and food, similar to what was set up in Hyde Park when Jenn and I went to see the royal wedding. And it was like that. Sort of. But, unfortunately, it had a big fence around it, which resulted in people having to stand in queues for at least half an hour. And we weren't allowed to bring any food or drink into the fenced-off area.

Due to the fact we had come equipped for a picnic and were therefore unwilling to dump all our food and water for the sake of then paying for it again on the other side of some hoarding, we decided to skip the event and instead find a nearby pub with televisions. We watched cycling with a load of Dutch fans until we got hungry, then wandered over to Regents Park for a late lunch/early dinner picnic. Sandwiches, all kinds of cous-cousy things I won't eat, crisps, fruit, pie and booze were spread out on a blanket. The sun shone in our faces, the sky stretched wide and pale blue in that amazing way it does on a nice day in London, and we sat chatting and laughing until about half an hour before Jessica Ennis was set to run the 800.

Time to find another pub with a TV. But the booze had affected our sense of direction slightly, which is to say that it affected everyone's ability to listen to me when I suggested we were charging off the wrong way. Eventually we made it out of the park and into Camden. The first pub was too busy. The next pub was too busy. Panic was starting to set in and American Jen declared we should all take a taxi back to the flat and watch it there.

There were six of us now, too many for a single taxi.
We'll go in two taxis, announced American Jen.
No one wanted to pay for two taxis. Far better to spend that money on beer. Besides, the race was on in 12 minutes. There wouldn't be enough time to get home.

But off American Jen went, speedwalking down the street in pursuit of I don't know what, with Devonshire Jenn hot on her heels, shouting "Wooo!" and waving a Union Jack.

"Go, babe!" I shouted at Devonshire Jenn, and the rest of us quietly decided to derail the go-home plan by walking slow.

We landed in a pub called the Spread Eagle, a nice enough place but for the fact that its women's toilets were reportedly atrocious. Jessica Ennis won gold and the pub seemed to come alive. When Mo Farah won gold in the 10,000m the whole pub was filled up with the sound of shouting. You could imagine the jubilation as a solid thing, testing the strength of the pub walls and threatening to smash the windows and spill out into the street. Devonshire Jenn attempted to lead the pub in a sing-along of Spandau Ballet's "Gold." No one took up the song with her.

"Come on!" she shouted, nudging me.
"I have never heard that song in my life," I said. "I don't think anyone knows it."

She looked at me as if I had claimed to not know the lyrics of "Happy Birthday." We stayed on at the pub a while longer. Team GB lost in football and only a handful of people in the pub even pretended to care. Soccer is old and busted, yo. Then we fell out into the Camden night.

Restaurants were still buzzing with diners. This was not the Hogarthian terror one would expect from Cardiff on a Saturday night. There was revelry, certainly, but not the feeling of menace that pervades Wales' capital. You can walk down the street and feel reasonably safe; you can imagine sitting at a restaurant with someone and being able to have a conversation. What is it about the 150 miles between Cardiff and London that so vastly affects people's abilities to behave themselves? London can be a rough place, I know. People get mugged and beaten and stabbed and, sometimes, shot. But when you compare the high-traffic areas of both places, London wins every time. It is so superior as to feel unfair.

Once home we were quick to bed, the day's booze and sunshine and walking and excitement having taken its toll. When Devonshire Jenn has had an interesting day she talks in her sleep. She curled up next to me and talked all through the night.

In the morning it was more pancakes, eggs, Mexican beans, salsa, fruit. More conversation and idly watching the women's marathon before heading to catch our train. Enough time to get cans of gin and tonic, and rum and cola from the M&S at Paddington Station, then we were on the 14:37 to Cardiff Central and slipping quickly from the city.
-----
(a) Never ever ever buy an HTC phone, bitches. I was a damned fool to leave the Apple Cult and plan to return as soon as the new iPhone is released in September (rumoured).