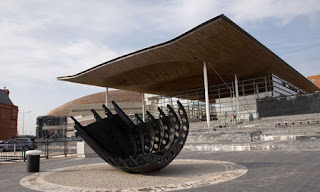 It's an establishing shot, you see. Nothing says "This story is set in Wales" quite so firmly as having someone pedal past the seat of Welsh legislative power. Of course, if the film were shown anywhere outside of Wales (or, indeed, in a fair few places within), the significance of the Senedd might not be immediately recognizable. I'm sure Americans would think my commute took me past a really swanky Holiday Inn.

I'm part of the elite 2.3 percent of Cardiffians who commute on bicycle (1), an act facilitated by a relatively temperate climate and a handful of traffic-free cycle routes. One of those routes is the one that takes me past the Senedd -- a roughly 1.25-mile stretch of car-free road connecting Cardiff Bay to Penarth. It is a route that suffers occasionally from inattentive skateboarders and frequently from strong gusts of wind that cut across the bay and Severn Channel, but those things are tolerable given the absence of speeding multi-ton metal boxes.

The other section of my commute, however, requires that I be on the roads: tiny, cars-parked-on-both-sides streets; hectic, there-are-no-rules intersections; and sooty, drive-as-fast-as-you-can city arteries. In Penarth I have to be alert for high-strung parents taking their children to work and drivers who are keen to do everything in their car other than, you know, drive (2). On the roads in Cardiff Bay I find myself dodging buses, white vans, and visitors to the city who DON'T HAVE A CLUE where they are going. And, of course, all of these people have to get wherever it is they are going now. No, now. Right now. 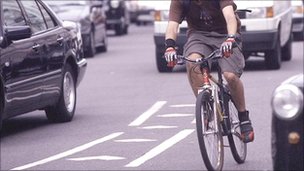 "If cycling conditions remain much as they are across Britain, cycling will remain a very minor mode of urban mobility, practised mainly by a committed hardcore of cyclists who feel able to 'do battle' with motorised traffic," wrote Guardian reporter Peter Walker in a recent blog article.

There is a sense of that in my commute, most certainly. When I get ready in the mornings -- pulling on Lycra, fastening Velcro straps, pulling on a high-visibility vest and clicking the clasp of my helmet -- I am reminded of the ritual of getting ready for a contact sport. I think of my brother when he played ice hockey, fastening all the pads, or myself before a rugby match, taping my ankles, knees and wrists.

On the road, too, my mind clicks in the same way it did when I played rugby, trying always to keep aware of and away from the 15 guys who wanted to tackle me. But getting hit by even the most vindictive prop is still preferable to collision with a Ford, so in the back of my mind there is knowledge that the repercussion for mistakes may be severe.

I have no doubt this is part of why the percentage of bicycling commuters is so low. If you were to ask my mother, for example, to navigate some of my route ("OK, Mom, you just need to zip across these three lanes, hell for leather, and move into this turning lane. When you get there, you'll probably want to not put your foot down because the gaps between cars are very small and you'll need to be able to get going again very quickly -- there will be a large van or truck behind you, which will give you exactly 3 inches of space.") she would patently refuse. Hold a gun to her head and she would seriously consider the bullet.

City cycling produces challenges some people are not willing to take on. It requires ability -- knowing the laws, being aware in what ways those laws are most commonly broken by drivers, and the physical/mental stamina and agility to maneuver through and amongst cars -- but also audacity. A confidence cranked to 11. Arrogance. The power to exude your will over people who can kill you simply by putting their foot down. Anyone who's known me for a while is probably aware that I am fully capable of being a hyper-aggressive ass. I generally try very hard to avoid being such a person, but on the road I find it hard to imagine how I could be anything else and still stay safe.

To that end, I often think it is not just the conditions that keep cyclist numbers low, but also those who are cycling. 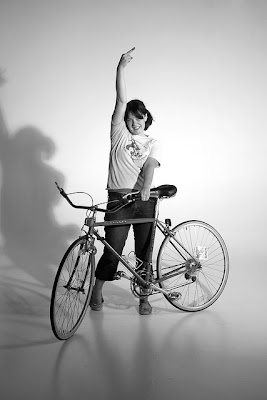 There is the attitude, of course. Having spent many years on the fringes of the minority community that is the Welsh-speaking world I have learned that niche groups, communities of people outside the mainstream, are often littered with obnoxious, evangelical zealots. In the Welsh world it's the All-Welsh-All-the-Time hyper-nationalists who are desperate to turn any outsider's action into an affront; in the cycling community it's the people who reference the Dutch in every conversation and seem to place motor vehicles somewhere on the Evil List near Nazism and baby punching.

Then there is all this gear we're wearing. Oh, for the love of Pete, we wear so much purpose-built gear. Lycra, helmets, breathable windbreakers, Velcro straps, gloves, scarves, special bags, special shoes, lights, reflectors. And the cottonpicking high-vis. The phrases "bad-ass" and "high-vis" are almost never uttered in the same sentence. I hate wearing high-vis, but also can't deny that every time someone moves past my office window wearing high-visibility clothing my eye is automatically drawn to him or her. High-vis is supposed to make me see a person, and against the interminable gray of daily British life it is very effective.

I have to think it's all likely to put off a novice. It creates the feeling that you have to act a certain way, have to look a certain way, and have to spend a certain amount of money before you can even take part.

In the equally small and silly motorcycling world there is the word ATGATT: All the gear all the time. It's a term used for that guy who dresses like he's about to do the Isle of Mann time trial when he goes out to get milk. The ATGATTer's response, of course, is simply to point to his skin and note that it's all there -- a crash is going to have the same effect regardless of destination or intent.

The same is true for bicyclists. Indeed, I have lately been legitimately considering getting a full-face helmet (3). But there's no denying I look like a damned fool. And even if I don't look as silly as I feel, if I were someone trying to promote cycling I'd worry a person would look at me -- or any of the other roughly 9,000 commuting cyclists in Cardiff -- and think: "I don't have all that gear, nor do I have the money for all that gear, so cycling isn't for me."

What all of this means, however, I don't know. The reason I started writing this post was simply to note that I cycle past the Senedd thrice a week, which, as I say, is a kind of nifty thing to have in one's commute. Whether I actually enjoy my commute, and whether I think other people should be doing the same thing. I'm not sure.

(1) A somewhat impressive figure if you consider that Welsh attitudes toward commuting via anything other than car are often quite similar to American ones. It is higher than the UK average but still a good distance from London, where as much as 10 percent of the population -- depending on neighborhood -- uses a bicycle.
(2) Seriously, yo, if you text and drive I have nothing kind to say to you. I don't care how slow you think traffic is moving, nor how good a driver you think you are. I have friends who text and drive and, genuinely, I wish injury upon them. Nothing awful, nothing from which they cannot recover fully, but I think they deserve a very expensive accident that results in a major broken bone and months of discomfort.
(3) Not only would it provide considerably more protection in a collision, I think it would also signal to drivers that I may be insane and should be given wide berth.
Posted by Chris Cope at 09:47 3 comments: