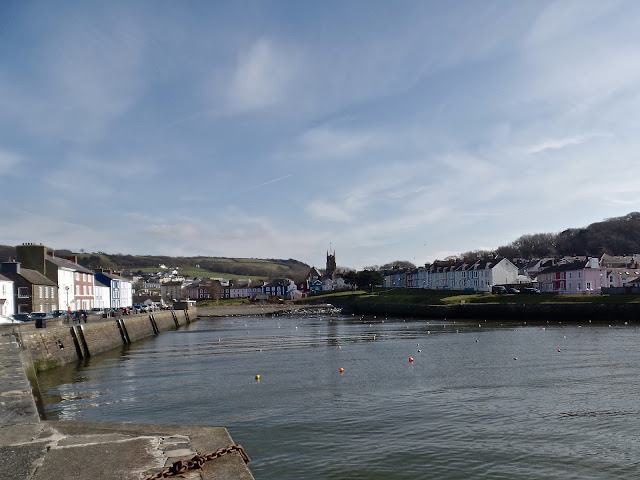 I first came up with the Great Welsh Tea Towel Adventure a few years ago. The idea was pretty simple: using the map on a touristy dish cloth (aka "tea towel"), I would visit some 66 different villages, towns and cities in Wales, as well as Snowdonia National Park.

The reason for this was twofold:

Firstly, it's an excuse to ride my motorcycle. Wales is a tiny country and just about any location within its borders can be reached and returned to from any other location within the space of a day. Wales has a number of exceptionally good roads for riding and if –– like me –– you live here, the proximity of everything to everything else means you can pretend you're on a fancy, exotic road trip without having to fork out for hotels.

The second reason was that I had developed a deep, unabiding hatred of Wales, and I found this to be somewhat detrimental to my overall wellbeing. I had come to Cardiff in 2006 full of incredulous belief I was moving to my spiritual home, that this would be my place of acceptance, my milltir sgwâr of belonging. But it turns out I was wrong.

In particular, I was wrong about the ever-dwindling community of speakers of Wales' native language. They are isolationist, exclusionary, and welcoming only in the sense that a really good B&B is welcoming. You may feel very cosy and happy and special in a B&B but there is always a clear you-and-them relationship. No matter how long you stay, how frequently you return, you will never be welcomed into the B&B owner's family; you will never become one of them; the B&B will never be your home.

That lesson was learned via a series of personal disasters that created in me a deep, festering bitterness toward Wales and everything in it. Which, as I say, was problematic. First and foremost because I was angry all the time. All I needed do to enrage myself was open my eyes and look at my surroundings. Was I in Wales? Yes? Cue rage.

That was a silly way to be. Especially in light of the fact I had no solid plans to leave. Convenience and circumstance keep me here: free health care, the fact my wife and I own our home, the fact my wife (an Englishwoman) generally likes Wales, the fact her best friend lives roughly 45 seconds away, and other little things. I want to leave at some point, and have made my wife promise on numerous occasions that she will not bury me in Wales should I meet an untimely end, but leaving right now creates a stack of financial and personal burdens that, ostensibly, may not be worth shouldering for the simple joy of being able to skedaddle.

It took me a long time to come to terms with the Not Going To Leave Soon reality of my situation (I still haven't completely accepted it) but I realized that if I was going to survive here without developing stomach ulcers, I was going to have to find a way to accept Wales for what it is, rather than what it isn't.

And what Wales is, generally, is a pretty-but-wet place populated by mostly nice people who will never show you true love. Which means that, of all the places you could end up, it's not actually that bad. I implemented the Great Welsh Tea Towel Adventure as a means of reminding myself of that.

But, as I say, that was a few years ago. The idea ran out of steam after a handful of trips and I soon found myself using my motorcycle more as a means of escaping Wales rather than improving my opinion of it. I was working a full-time job and I didn't want to waste those rare moments when good weather intersects with a weekend trying to change my opinion about a place.

Then, late last year, circumstance pushed me into the life of a freelance journalist. With my schedule now more flexible, I decided it would be a good idea to restart the GWTTA project. After all, the financial instability inherent in freelancing roots me even more firmly in Wales; no new home loans for me. And in restarting the project, I decided to go about things in a more systematic way: choosing to visit places alphabetically.

So, Aberaeron –– a small town on Wales' west coast –– was placed at the top of the list. Where it stayed for the next three months, thanks to one of the facets of Wales that causes me the most displeasure: weather. For three months not one day passed in which rain was not forecast for Aberaeron. Sometimes it was an all-day light rain, sometimes it was a heavy rain with gales, sometimes it was drizzle with freezing fog, but always there was rain.

Finally, just a day or so before my 40th birthday, my phone's weather app showed an open window. So, I threw my camera in my pocket, hopped on the bike, and pushed northwest. 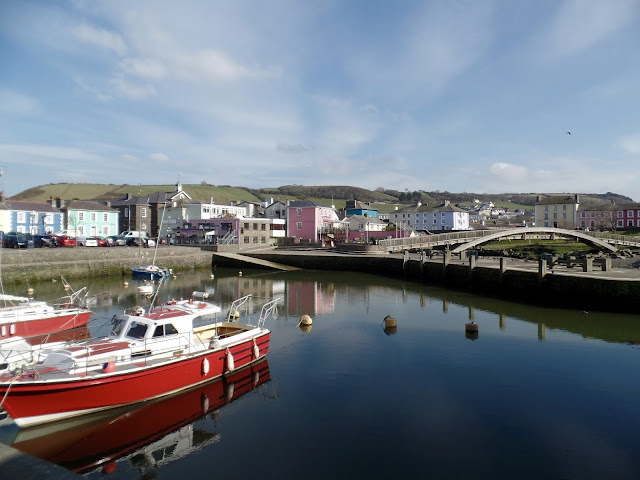 Aberaeron is some 95 miles from Penarth via the "slower," more interesting route that I chose. Google Maps would have had me get there by a long stretch of motorway, running from Cardiff to Carmarthen on the M4, then trundling up the A485 and A487. But it's generally my experience that you can get somewhere in Wales more quickly if you avoid main routes, i.e., the routes suggested by mapping programs and GPS devices.

Fortunately, Big Brother's reach isn't as vast in Wales' interior as other parts of Britain. And the fact that local authorities have abandoned actual policing in favor of stationary yellow boxes on main routes means that the odds of your getting in trouble for riding 110 mph on a 60-mph road are shockingly low.

My route took me first across an eastern section of Brecon Beacons National Park, where sheep served as the only witness to my Suzuki's high-rpm snarling. Twisting routes like the A4069, A4059 and A4067 provide scenic riding that –– in certain sections –– is on par with roads I've encountered in Italy. Sight lines are good across the moorlands, meaning you can see all the way through curves, and road quality is generally better than you'd expect for tarmac so exposed to the elements. Sheep poop and gravel are omnipresent, and overnight ice can sometimes linger into the afternoon, but sane riders can still enjoy spirited biking. 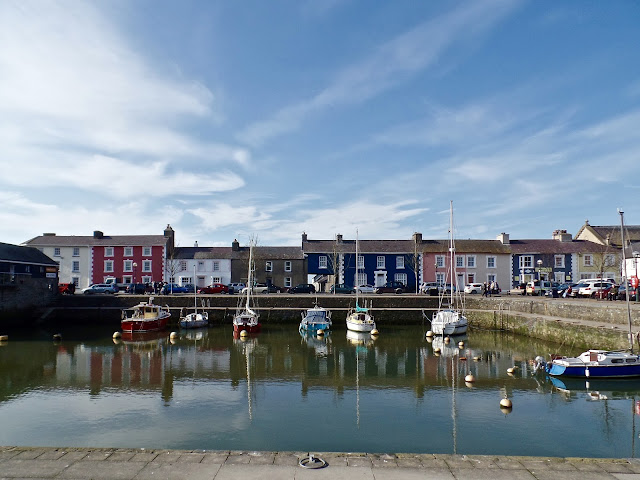 Further east, I hopped onto the A482, which winds its way through slightly more forested terrain all the way to Aberaeron. Technically the speed limit on large sections of this road is a bafflingly slow 50 mph, but, as I say, there is no enforcement. I made good time.

I don't know why my tea towel draws particular attention to Aberaeron. As far as I can tell it isn't noteworthy. It doesn't get a single mention in John Davies' A History of Wales, which, at 718 pages, contains exceedingly more information about Wales than anyone ever need know.

More than 800 years ago, Aberaeron was home to a fortress known as Castell Cadwgan, named after one of the myriad squabbling warrior kings that fought over Wales until Edward I succeeded in conquering the region in 1283.

There are no signs of the fortress now, and it was all but gone to the sea when the town was set up as a shipping port in the 1800s. For a very short while it supported the shipbuilding industry but by the start of the first World War it had generally turned its hand to the task of attracting tourists.

To that end it is a lovely place to visit on a sunny day. Aberaeron is located in the Welsh county of Ceredigion but it feels more Pembrokeshire to me. The latter county has been known since Tudor times as "Little England Beyond Wales" thanks to the fact it was the area of Wales most successfully held by the Normans in the 12th century, and roughly 1,000 years later it possesses a certain Englishness.

How you interpret that depends on your view of Englishness. To me it is good. Aberaeron is colorful and it has a handful of little shops, boutique restaurants and charming pubs. It is immediately likeable; it is the sort of place one might choose to take his parents were they to travel several thousand miles from another country. 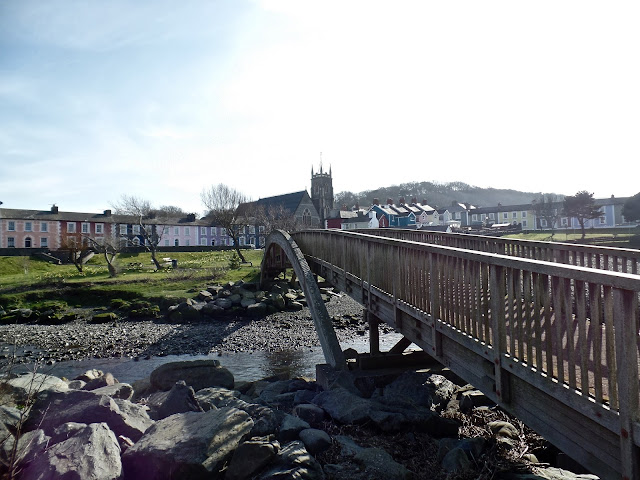 In contrast to its perceived Englishness, according to the ever-reliable Wikipedia, some 70 percent of the town's inhabitants speak Welsh. I suspect some fuzzy math there, however, because in walking around I didn't hear a single Welsh word being spoken.

Not that I cared, really. The sun was shining and it was warm enough for me to take my jacket off. I bought an ice cream and sat on a park bench overlooking the harbor and sent a text to my wife expressing my delight in having a freelancer's schedule. Far better to be doing this on a Tuesday afternoon than sitting in an office.

Aberaeron is home to the annual Cardigan Bay Seafood Festival in July, which might be worth returning for, but on a random weekday in March it was unsurprisingly quiet. Pretty, charming, but still not terribly noteworthy.

Once I had finished my ice cream I walked around town. Maybe I will come back with Jenn in the summer, I told myself. Aberaeron would be a nice place to spend the day –– eat some ice cream, go swimming in the sea. I guess it depends on how many other people have the same idea; the smallness of the town suggests it wouldn't be very enjoyable when crowded. And really, there are similar places –– in Pembrokeshire, for example –– that are easier to get to.

Either way, I suppose it was a good way to restart the GWTTA project. After walking around a little more and finding not much to pique my interest, I bundled up in my gear and sped home to Penarth. Next on the list: Aberdaron. 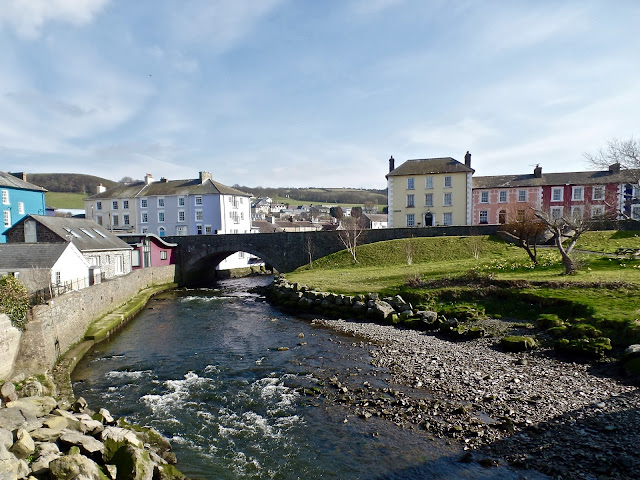 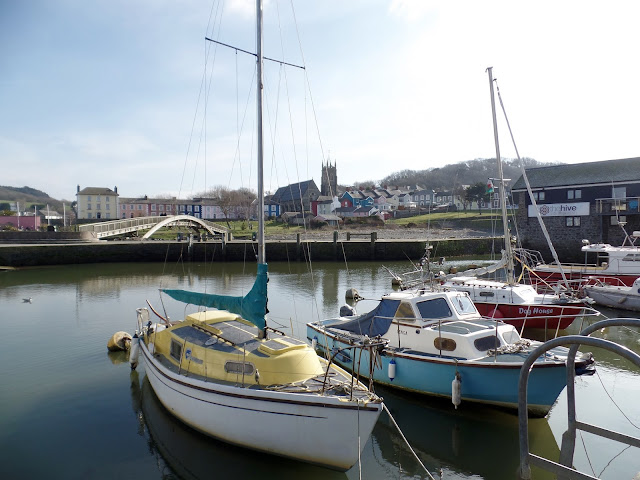 This post was originally published on my motorcycle blog, The Motorcycle Obsession.
Posted by Chris Cope at 13:46 No comments: