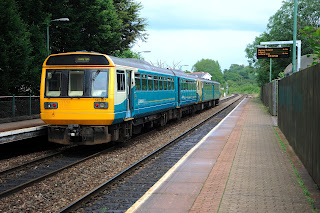 CARDIFF –– It is 8:33 a.m. and the train from Barry is full. Squealing into Eastbrook station, three stops from Cardiff Central, it is running nearly five minutes behind schedule. Passengers standing on the bare platform engage in a personal battle of will as the train comes to a halt: the ear-splitting noise from its brakes makes them want to move away, but to do so would result in losing one's place in the amorphous queue forming at the door.

They wince, turn their heads and plug their ears at the noise, and jostle for position. The doors open with a clunking hydraulic exasperation and those standing on the Eastbrook platform are greeted by the sight of the backsides of passengers already on the train. There is no place to sit. Bodies have packed into the small space near the doors.

There is a tiny moment of resignation –– a steeling of will –– and the Eastbrook passengers begin to muscle their way onto the train. Apologies are muttered, awkward glances are exchanged.

"Excuse me," announces a heavyset woman still on the platform.

The passengers in the door well of the train look at her apologetically, shift from one foot to another, but there is nowhere for them to go.

"There's another one coming just now, love," shouts the guard, who is standing at the other end of the train. "You'll have to wait for that one."

The next train is scheduled to arrive in 10 minutes. No doubt it, too, is running late. With a determination that would see her capped for her national rugby side, the woman lurches into the crush. A young man finds himself embracing her in a manner that can only be described as deeply intimate. The doors close and the train begins to trundle forward.

The train is a Class 142 Pacer, an almost 30-year-old diesel unit known to train buffs as a "Nodding Donkey" or "Skipper," due to its rough ride and tendency to derail. It is a train from a different time, a different Britain, when the population was shorter, thinner and fewer. Its door hinges are caked in grease. The floor is sticky. Its seats and walls are cut with graffiti. On this morning, the windows are completely fogged from the breath of passengers. The air is heavy and damp, almost unbreathable. It is the sort of choking atmosphere to make one's clothes feel ill-fitting, to make the shower taken not an hour before seem for nought.

This is how it always is –– how it has been for a long while. On the Vale of Glamorgan Line, the Merthyr Line, the Rhondda Line, the Rhymney Line, and just about any other Arriva Trains Wales service rolling into Wales' capital city on the morning commute, the evening commute, school holidays, or special events like a rugby international match. The carriages are packed dangerously full and passengers wear the beleaguered posture of a people who know there is nothing they can do.

Privatisation has provided no options, no competition. This is the only choice in terms of train travel. The one accomplishment of privatisation, it seems, is in making culpability more difficult to determine. Ask who's to blame for the woeful state of things in Wales and you will rarely get more than pointing fingers.

"You will need to contact the Welsh Government for information on your enquiry," came the terse reply from Network Rail in response to questions about overcrowding on South Wales trains.

The issue of overcrowding is so bad that Arriva Trains Wales has allegedly been unwilling to cooperate with environmental organisations promoting train travel, for fear it will bring them new customers. It doesn't want any more business.

Faced with consistently brimming trains, the first question many passengers ask is: Why not add more carriages? If trains are time and time again arriving full of rumpled, unhappy people who have had to stand, cuddling a stranger, for the whole of their journey why not just make the trains longer?

For years, Arriva's response was that the platforms could not accommodate such a solution. Like the trains being used in South Wales, many of the area's train platforms were of a different time and not long enough for anything greater than a four-car train.

Then, in 2007, the Welsh Government forked out £13.2 million to extend some 42 platforms to ensure they were at least long enough to accommodate a six-car train. The work was carried out by Network Rail. In a July 2012 written response to plenary questioning by Assembly Member Eluned Parrott, Wales Local Government and Communities Minister Carl Sargeant said the aim of the project had been to "future proof the infrastructure to accommodate longer trains to provide additional capacity at such a time when demand necessitates."

Most daily commuters would have said such demand already existed in 2007. Six years on, however, not one of those extended platforms has been graced by a six-car train (the nature of the stock used by Arriva in South Wales means the number of carriages must be even; a five-car train is not possible). The largest passenger trains seen on South Wales Valleys lines are still just four cars long.

When asked to explain the situation Arriva Trains Wales took a month to respond. Their eventual reply was simply: "As this was a Welsh Government initiated project, you will need to speak to them."

And in an earlier Twitter exchange, the rail provider had stressed that the project was not their own: they didn't pay for it, they didn't do the work. "Platform extensions funded by Welsh Govt and delivered by @networkrail," the company said on its official Twitter account.

It would be interesting to learn whether Arriva asked for the project, and whether longer trains were promised as a result of it. Was the whole thing a surprise? A rogue move by a Welsh Assembly keen to flex its platform-funding muscle? That's a question no one seems able to answer.

What is clear is that the need for six-car trains exists. According to Liberal Democrat AM Eluned Parrott, who has held frequent talks with Arriva, the company are "happy to operate larger capacity trains" but the problem they face is a lack of stock.

Funding for the private company's stock comes from the Welsh Government. In 2006 and 2007, the government put forward funding for an additional 17 diesel units, which would appear to contradict Arriva's Twitter claim that "(we) did not receive funding for extra trains."

It also contradicts Carl Sargeant's response to a question about capacity posed by Conservative AM David Melding.

"The Welsh Government has invested in extra rolling stock for additional and strengthened services in South Wales," he wrote on 28 November 2012.

Parrott appears to have been told otherwise by Arriva.

In July 2012, the UK government announced plans to electrify large swathes of the country's rail network, starting in 2014. Lines in the South Wales Valleys are set to be a part of that electrification process, but Parrott suggests it will still be worthwhile to purchase additional diesel units because South Wales will be one of the last places electrified. According to the BBC, electrification work may not even begin in South Wales until 2019.

This wide timeframe for electrification seems to vindicate additional diesel units. But at the same time, according to Parrott, it vindicates the decision not to fund new trains. New stock "would take approximately 2-3 years to deliver and would be redundant once the lines are electrified," she wrote.

New trains, she said, would need to be operational for 20 or more years to be seen as "commercially viable as an investment to one of the private firms."

One can't help but wonder why commercial viability is relevant when the Welsh Government is apparently expected to foot the bill, but, as Parrott points out, "buying new for 5-8 years service cannot be considered a good investment for the taxpayer either."

According to Plaid Cymru leader Leanne Wood, the reason the Welsh Government is stuck throwing money at a private company is down to a decision made by Tony Blair's government in 2003. At that time, the Welsh Assembly existed but it did not have the powers necessary to make decisions about Wales' rail network. A 15-year contract was entered into by the UK Department of Transportation.

"What the Department failed to do at that time," explained Wood, "was forecast correctly the growth in passenger numbers."

In light of the recent scandal involving First Great Western's bid to run the West Coast Main Line, the insinuation of bad maths is not hard to believe.

Wales is locked into its contract until 2018, said Wood –– a contract that means Arriva "are not required to do anything more, in terms of service provision, than is included in the franchise." Which means the Welsh Government has had to pay for most service improvements, the platform extensions, and additional stock. Network Rail has provided some funding as well.

Though, the Welsh Government may also shoulder some of the blame for all this. Quite often it appears one hand doesn't know what the other is doing. Requests for information were met with a number of responses that occasionally contradicted one another.

For example, a response from James Ardern of the Welsh Assembly Government Rail Unit claimed that six-car trains are being operated regularly. This is a claim that contrasts both the experience of passengers and all available evidence. Indeed, if it were true, it most certainly would have been Arriva Trains Wales' response, rather than claiming it hasn't been given enough stock. A request for proof to substantiate the claim of six-car trains in operation has thus far gone unanswered. (Investigation for this story began in mid-November 2012)

The observed truth for South Wales commuters is that nothing is really changing, but with each passing year they are paying more for a substandard service. For the 10th consecutive year, UK rail passengers were last week hit with fare rises that are above the rate of inflation. In Wales this comes on top of a 6.2 percent fare increase that was implemented in August.

There are plenty of directions in which to point the finger of blame –– privatisation, pre-devolution government, infinite bureaucracy –– but that has little effect on the pertinent issue: people are still packing uncomfortably onto Cold War-era trains, and will be stuck doing so for the foreseeable future. South Wales commuters will be cuddling up to each other for a long time yet.
Posted by Chris Cope at 11:59

EASTBROOK! My summer morning commute to Treforest! Can't get my bike on before 9.15, rammed to Queen St, empty to my destination thereafter. Headphones on, book out. Bliss. Hell to heaven in 25 minutes.

Agree the mornings, evenings are shite, Saturdays and Sundays though are a fab alternative to driving into Cardiff. Always get a seat, pretty much always on time...............

Basically though Arriva trains are a bunch of slimy tossers who won't do anything to improve the service so long as they can screw customers and any trouser any subsidies to be had.

Ying and Yang at the end of the day Chris. Colleagues from other parts of Cardiff stuck in traffic on the A470 always say "at least you have got a train, wish we did"

Good bit of journalism! It belongs on a MSM site where pols and those paid from the public purse will feel more pressure to respond sensibly.