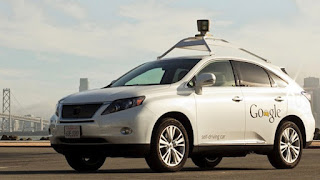 Driverless cars, y'all. That is the future. Indeed, to a certain extent the future is now. But I find myself completely fascinated with the various news articles that predict driverless cars will be the norm within 20 years. A future in which cars drive themselves is one of my favourite things to daydream about. And I love that this is a future imaginable within my lifetime.

Because the thing is, old people are not very good drivers. I used to work as a member of the American Media Conspiracy and it seemed stories of senior citizens careening their land yachts into houses, or motorcycles or pedestrians were almost weekly. Type the phrase "elderly driver" into a Google news search and be amazed at what a menace to society are your grandparents. Soon enough it will be your parents. And then it will be you.

That last one is the most important to think about, I suppose: one day it will be you. When I worked in the American Media Conspiracy I would frequently lean back in my chair and pontificate to any and all within earshot my opinion that licensing should be more stringent. I would lament the political might of the AARP and AAA and automakers, and their combined capacity to prevent any such measures from ever being seriously discussed.

But think about it a little more deeply, with or without various organisations' interests, and there is something very sad and cruel in such suggestions: you're taking away a person's freedom of movement, their freedom to go where they want to go when they want to go.

I have found myself thinking a lot about this in recent months because of the unexpected side-effect that came from Jenn and I getting rid of our car last year (1). My inability to just hop in the car and go has exacerbated my homesickness to the point of debilitating depression. This is one of the reasons I have become so obsessed with motorcycles lately: they are a cheaper (and often more environmentally friendly) means of achieving that all-important sense of personal freedom. It is incredibly important to me.

One day, though, in, say, 20-30 years, my hips won't really be limber enough to throw my leg over a motorcycle. And afterward, in another 10-20 years, my eye-hand coordination won't really be quick enough that I should be operating a car. But I doubt very much that at that point I will be mentally content to just sit and watch CNN for the rest of my life. 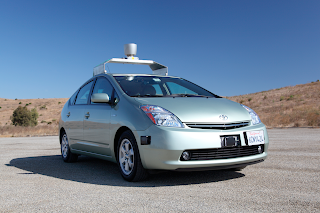 In imagining my life that far forward, I feel tremendously relieved to think there will be driverless cars. I will not have to lie to myself about my driving ability ("Oh, my eyesight isn't that bad... and I'm only going down to the store...") to maintain personal freedom, I will be able to just get in my car and let it worry about the road. Perhaps auto manufacturers will even think to install some sort of voice software that will patiently listen to whatever rantings are going through my old-man brain. Imagine the scenario:

"Why, Mr. Cope, what a good idea you have," the car will say. "It's a shame there aren't more men like you, instead of all these kids with their boomity-boom music."
"Hey, car," I'll say. "Did I ever tell you about the burlesque dancer I fell in love with?"
"You have, Mr. Cope. But it's one of my favourite stories. Please tell it again."

I find this all to be an incredibly happy thought. What a wonderful future it will be. Seriously. It's going to be so awesome. Sure, there will always be enthusiasts who will want to drive cars manually, but most of us, old and young, will leave the driving up to the vehicle itself. 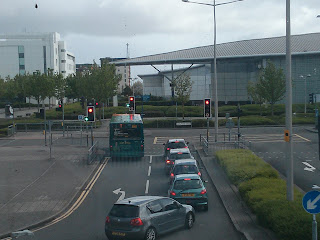 And it occurred to me the other day: when this awesome future arrives, what will happen to road signs? Cars will be navigating via SatNav and shared mapping and radar and lidar and so on, but they won't really be reading road signs, will they? I mean, take a look at the intersection on the left, which is what I see from my office window at work..

A few signs might be kept if they are useful to pedestrians. And perhaps at least one stop light for old-school manual driving enthusiasts, but much of the visual clutter could be removed.

Additionally, will these cars need street lights? Will the cars themselves need lights? In areas where there are no pedestrians, such as motorways, perhaps visual pollution could be eliminated. The act of driving cross-country at night could become a safe, high-speed stargazing experience.

"Did I ever tell you, car, about how I used to have to do all the driving myself?" I'll ask.
"Yes, Mr. Cope. It sounds exhausting. You also explained how the driver's licensing system was a racket controlled by the corrupt and unimaginative."
"Oh, Lord, car. It was. It was. Hey, do you mind putting on some music?"
"I'd love to, Mr. Cope. I certainly hope you're thinking of blaring ZZ Top again."
"Car, you are in luck. Because that is exactly what I was thinking."

(1) I still had not earned my UK driver's license and the cost of insurance for a foreigner is insane.
Posted by Chris Cope at 11:59

Email ThisBlogThis!Share to TwitterShare to FacebookShare to Pinterest
Labels: modern life, Signs that I am old and busted, Stuff I think about

I wasn't on board with the idea of driverless cars until I found out that they love ZZ Top.