What country is Ferguson in? 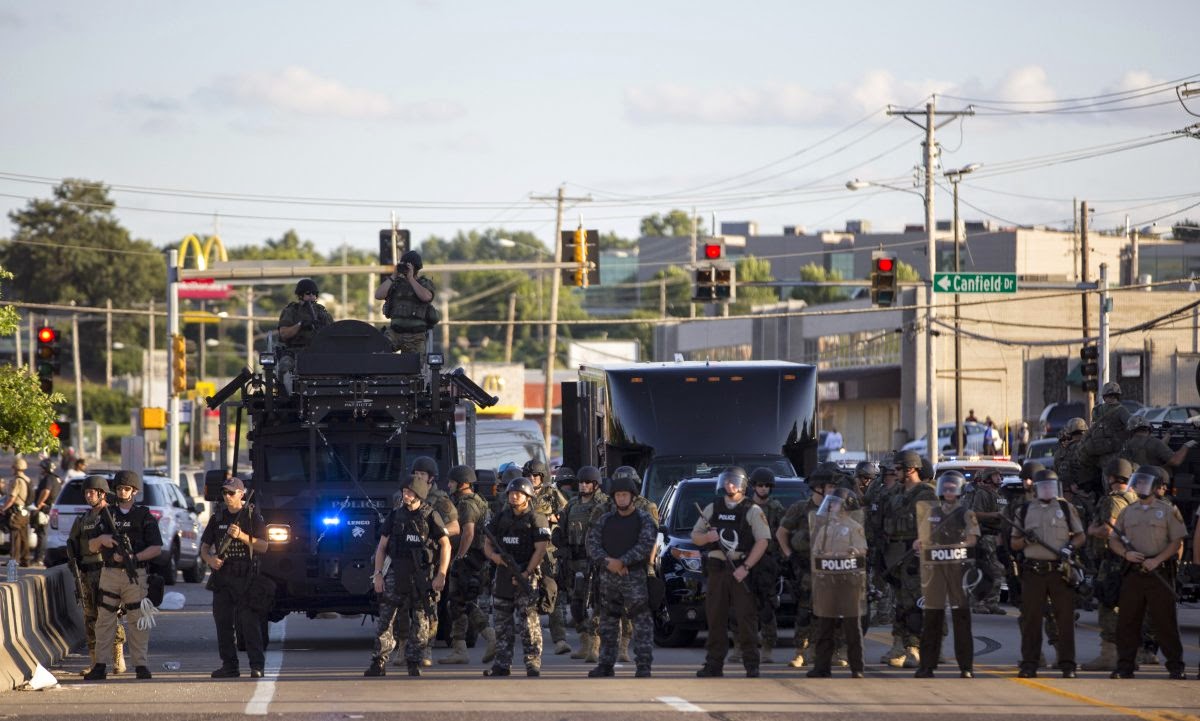 I'm glad to see that the mood in Ferguson, Missouri, seems to be improving. Though, I find it frustrating and troubling that it took so long and such upper-level intervention (i.e., the state governor and the president of the United States) to do the totally obvious thing of, you know, speaking with protesters about their grievances.

Generally, if people are protesting something it is because they feel their voices are not being heard. So, the way to calm them down is not necessarily to march a load of storm troopers at them, choke them with tear gas, and tell them to shut up and go home. I thought most of us already knew this. I find it distressing that an entire police force in America didn't know it.

But extending forward, beyond the specific issues of Ferguson, the thing that frustrates me most about this embarrassing episode is that it effectively vindicates the batshit crazies.

You know all those people who shoot up schools and movie theatres and workplaces in America? The reason they are armed to the teeth is that a number of other people have worked very, very hard to protect (and, in my opinion, misinterpret) their right to own such hardcore weaponry. Each time one of these mass shootings takes place, however, the rather obvious question comes up: "What American actually needs these kinds of firearms?"

After all, you don't hunt deer with a TEC-9. And, arguably, a good ol' fashioned shotgun is a more effective tool in protecting yourself against intruders because the scattering nature of buckshot takes some of the pressure out of having to aim properly. Machine guns and semi-automatic handguns are really only good for a military-style assault.

Publicly, the gun nuts will talk around these points and try to hold to a philosophical argument about the nature of freedom. We're free, they say, and we shouldn't give away freedoms just because something bad happened. Because bad things always happen, and eventually you'll find yourself completely without freedom.

But pull a gun crazy aside, into a private conversation, and he or she will often say that one of the reasons it's important to interpret the Second Amendment as broadly as they do is so they have the means to defend themselves against a tyrannical government. That's certainly the view of Cliven Bundy and the whole sovereign citizen movement. Those dudes are ready, yo. Ready to stand their ground against the unmarked helicopters and faceless jackbooters that haunt their dreams.

I used to live in the American West, so I've encountered a number of these dudes, or, at least, dudes who sympathise with them (it is almost always dudes, by the way). And when they would tell me they needed high-powered rifles so they could defend themselves against a an evil police state my reaction was usually along the lines of: "What? You are a paranoid nutcase. We live in America, man. We live in a functioning democracy. It's not some strange, terrible dystopia where you need to protect yourself against everyone, especially your protectors."

I mean, really, those guys are crazy, right? 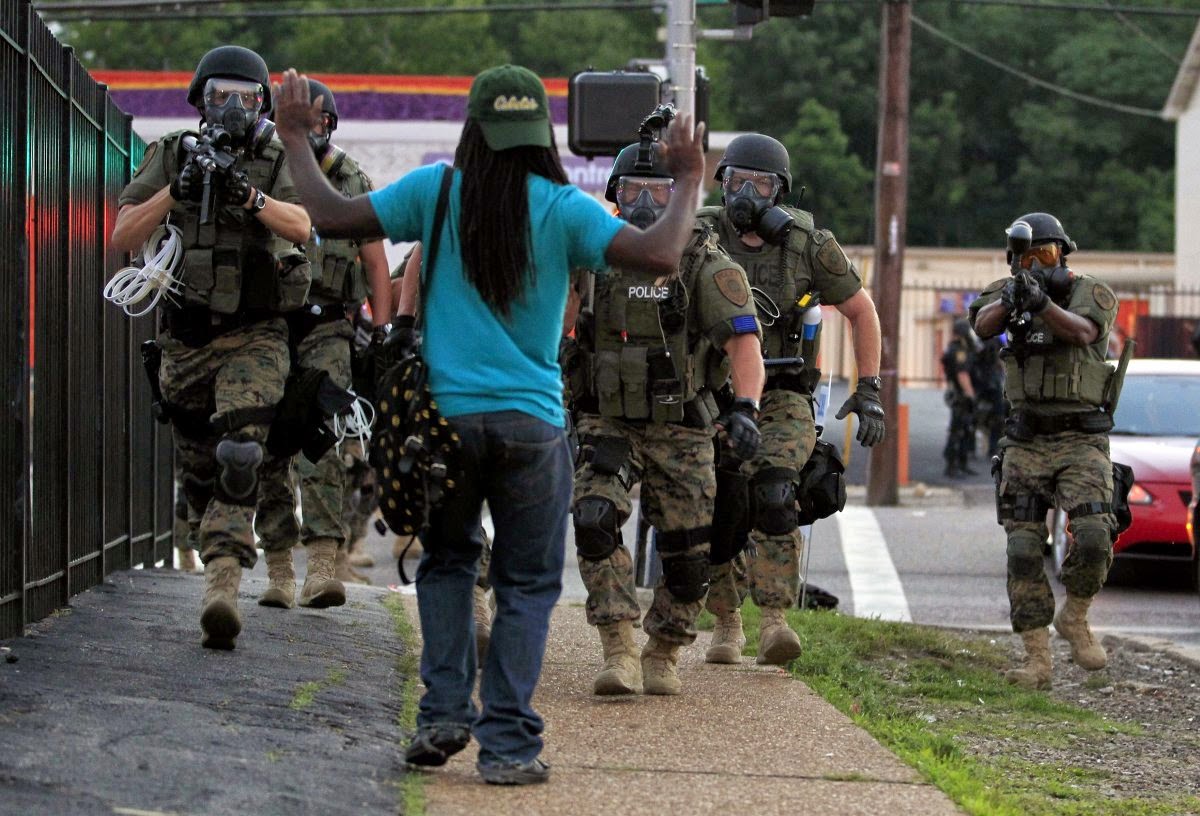 Scenes from Ferguson, Missouri, offer vindication to every batshit crazy, confirming their belief that the government has detached from its purpose and turned against its citizens for reasons unknown. Because, honestly, where's the reason behind responding to unarmed protesters the way Ferguson has done?

Look at that picture above. Click on it to make it bigger and take the time to examine it. I'm counting no less than seven faceless officers stomping toward a single individual. At least two of the officers have their weapons trained on the guy. One is brandishing a nightstick and has a pepper spray cannister. All of the officers have more body armour than the soldiers who invaded Iraq. All have weapons holsters on their thighs. The single individual, meanwhile, has long hair and a flowery man bag.

Who wouldn't think of arming themselves against this kind of thing? Hell, to be honest, I am surprised by the incredible restraint shown by the citizens of Ferguson. And I am enraged by its police, who have given people good reason to fear and distrust them.
...

On a somewhat related note, I wonder how those Open Carry boneheads who flaunt their "rights" by shopping at Target with a rifle over their shoulder would respond to the sight of dozens of black people doing the same thing...
Posted by Chris Cope at 17:00

So I'm your batshit crazy FEMALE friend who believes in owning guns and ammo, and lots of it. I watched the riots in L.A. years ago after the Rodney King verdict. My daughter was a baby and I was utterly horrified. It changed me, deep, deep down inside. I was wholly impressed with the Korean store owners who were manning the roofs of their stores and shooting anyone who stepped in the parking lot.

I decided then and there I would get a gun and learn to use it. I didn't fear the government as much then as I do now (live and learn) but I fear the breakdown of our society in the wake of a disaster. So I armed myself. I started hoarding ammo, but I stopped after I had a goodly amount.

I bought my house specifically because of it's location and windows on the second floor, to have the ability to protect it from every angle. That's batshit crazy, right? Well, after you have a teenage daughter, and you witness riots close to home, let me know how crazy it sounds.

And yes, now I fear the police state. I think about those things often while riding.

Now that I'm traveling I can't carry my gun across the country. I have it stored, but I plan to learn the gun laws and take it with me the next time we leave California. I've reached a point where I don't want to ever be unarmed. If that means avoiding certain states due to gun laws, then that's what I'll do.