The physical and the mental 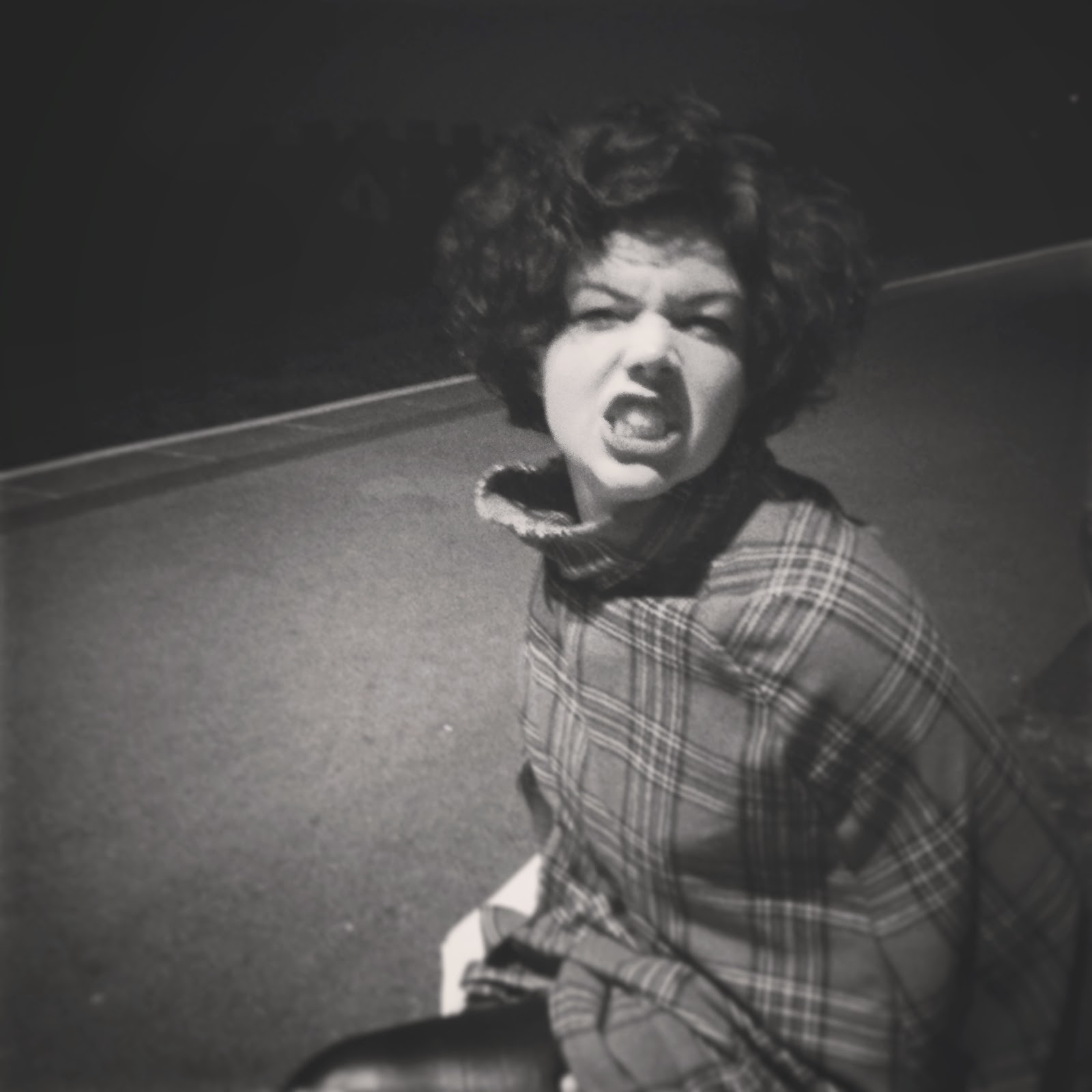 The Dublin Marathon is in less than four weeks. The sooner those weeks pass the happier I'll be, because training has brought on oppressive fatigue. It is not just that I am sore and tired all the time but that I am mentally exhausted as well. And as such, I get too easily overwhelmed by life. Little things unpick me, as if I were one of Jenn's sewing projects.

That's Jenn in the picture above, of course, wearing one of her sewing projects: a cape she made for a fancy dress dinner party last weekend. For those of you playing along at home, "fancy dress" in the United Kingdom means "costume." Imagine my disappointment when I first learned this many years ago; I had envisioned a soirée with people in tuxedos and evening gowns. Anyhoo, the dinner party was one of those murder mystery things in which one of you is the killer and everyone has to figure it out.

The setting for said murder mystery was London in 1961. In black and white, with Jenn sitting on a train platform and the grim rowhouses of Grangetown just barely silhouetted behind her, she looks like part of the rebellious element that was bubbling beneath the surface at the time –– like a girl who might have ridden with the ton-up boys.

We had run 15 miles that day, but Jenn has inexhaustible talent for getting up for an event. Whereas I find that as I get older I am damned boring on even my good days. Fortunately, Jenn's friends have taught themselves to expect little of me.

On that 15-mile run I had failed to stretch properly either before or afterward and had developed an oh-so-slight pain in my right hip. Add it to the radiating pain in my knees, the ache in my toes, the shin splint in my right leg, the lower back pain and the mysterious and inexplicable pain in my hands. I didn't think much of it until this morning.

Last night I had come home from work and run 5.6 miles around Cardiff Bay, again without really taking the time to stretch. I had assumed my cycling home from work enough of a warm up. But through the first miles my right foot wasn't striking the pavement right. My shin ached and my hip ached and my legs felt heavy. I imagined myself tied to and dragging a boat down a canal. Because that's the way my mind works, yo.

Things evened out by the end of the run and I finished OK, but afterward was hobbling around the flat because of the ache in my hip. Overnight, the pain was such that I kept waking up. And that has pretty much taken all the wind out of my sails. I have fallen into a comedy Eeyore-esque moroseness and I feel utterly defeated.

My mind jumps quickly to worst-case scenarios. Jenn and I are planning to run 22 miles Saturday as part of the training, the peak before winding down to ensure we are ready for the actual race. I have lost faith in my body, though, and wonder if I will be able to complete this weekend's run. I wonder if it will cause damage that won't heal before the race. And instantly I envision myself dressed in normal clothes on the day of the marathon, sick with myself and limping, able to do no more than cheer Jenn's efforts.

Meanwhile, if you happen to be looking at this site on an actual computer or laptop you'll notice the look has changed. In hindsight, I wish I had taken a screengrab of the blog before changing everything –– just for posterity's sake. C'est la vie. I can't remember, but I think I had been running the previous since 2010.

The new look is considerably simpler, with less sidebar information. Simple is the new hotness, it seems, and I guess it makes sense. Quite a lot of people –– if not most of them –– surf the internet via mobile devices these days. Filling a page with sidebar columns is cluttersome and pointless since many mobile browsers filter them out. I'll admit, though, that I struggle to commit to simplicity. I could probably stand to apply even more minimalism.

My inspiration for the redesign comes from two people: Chris Phin and Chris Phin. Ever since we sat around on the floor of his and Jenny's bare-bones flat in not-so-fashionable New Cross almost exactly nine years ago I have held strongly the view that Chris Phin Is Probably Right when it comes to things tech/internety. You know, the way Neil deGrasse Tyson is probably right about astronomy, or AC/DC are probably right about how to play a kick-ass guitar riff. Other people might have equally valid and possibly better opinions, but if you're looking for a safe bet these dudes are the ones who are probably right.

Nine years ago we were sitting on the floor because, like all people in their 20s living in London, Chris and Jenny could only afford a single piece of furniture: a futon. It felt awkward for us all to be sitting on the futon at once having a conversation, and there were no tables upon which to set our drinks, so we took to the floor. Despite the fact I was in their flat and planning to stay a few days it was my first time to physically meet them; we had formed a friendship through our respective blogs. The wonders of technology, y'all.

Anyhoo, I'm wandering from the point. Chris and I stayed up late drinking and talking about said wonders, and it instilled in me a sense that he was probably right in his opinion of them. This is a feeling since reinforced by his professional career; he's written for and been at the helm of numerous tech-related publications.

His website is simple. Which means that simple is probably right.

Meanwhile, if you look at his simple website at the moment you will see a post talking about his recent decision to step down as editor-in-chief of MacFormat. The plan, it seems, is to go into business for himself, doing freelance, consulting and all the other things media professionals do when they come to their senses and decide they need to step away from the day-to-day slog.

Personally, I applaud this move, if not simply because the last few times I've seen Chris, chatting with him has been just a tiny, tiny, tiny bit challenging. Not because he's dull or any such thing but because he has for the past few years been so tremendously overworked. I had this feeling I was competing for his attention against the bazillion other things he had to do and felt guilty about it. You don't want to add more stress to your friends' lives; you don't want to be another thing they have to think about.

Going into business for himself won't necessarily reduce his workload but it will give him greater control of it. And hopefully that will result in less stress overall.

Aiding him in his freelancing effort, Chris' simple-design website also serves as a tool –– a shingle, to use old-school British lingo –– to communicate who he is, what he can do, and how to contact him. And again, here's me totally copying his moves.

In the past few weeks I've had a chance to write a few freelance articles for some motorcycle websites. Which is awesome on two levels:
1) People are paying me to write about motorcycles, yo.
2) It's a real step toward one of my major goals in The Five-Year Plan.

I don't think I've mentioned The Five-Year Plan before. It's a 12-page document I wrote up in July, outlining the myriad steps I need/want to take in order to get myself from what I am right now to something more like what I want to be. Effectively, it's an extension of the whole 183 Days idea, which fell flat because it lacked structure beyond just really hoping my writing career would take off.

The Five-Year Plan is more focused and includes just about every aspect of my life: career, relationships, health, etc. The part that deals with career sees me building incrementally toward professional writerdom and sets earning goals in terms of percentages of annual income. It's boring stuff if you're not me.

These recent freelance gigs –– which will likely help me achieve my earning goals for 2014-2015 –– pretty much fell into my lap. I am hugely grateful for my luck, but it occurs to me this won't always be the way things happen. Sometimes people will come from nowhere to offer an opportunity, more often, however, I will need to find them.

So, in simplifying my website I'm also trying to rejig it to serve as a little more of a tool. You'll notice, for example, the blog no longer has a title; it's just my name. Though, I have kept the "Dancing the polka with Miss El Cajon" sentiment in the subheading/description. I've added a portfolio section (which may or may not be a good idea). I'll add a contact section soon. It's all a work in progress; I'm not happy with it yet.

All this is quite exciting and feels very much like those happy moments when you are actually living up to the expectations and ambitions of your younger self. But then hip pain keeps you from sleeping for just one night and you wake up feeling that all is lost.

Training for the marathon is beating me up both physically and mentally. I find it so hard to recover from tiny little things, so hard to push myself through the molasses of tiredness. Here's hoping the 27th of October comes soon, and that I can survive all the way there.

Email ThisBlogThis!Share to TwitterShare to FacebookShare to Pinterest
Labels: About me, Dublin, friends, Jenn, Signs that I am old and busted, sport, The Phins

I have hair-and-cape envy, Jenn is so glam!

It's not that we were poor in London (actually, I was significantly better off than I am now), it's that getting furniture delivered and up the little flight of stairs was a massive pain in the arse, so we tended not to bother! New Cross is ultra-trendy now, we couldn't afford to live there these days.